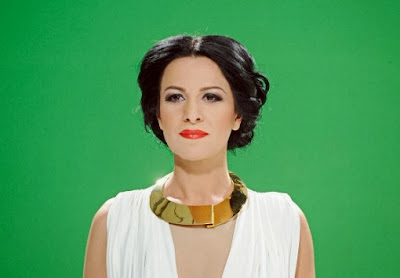 Staging, jokes and Wagner - Angela Gheorghiu, the last diva, talks straight about Jonas Kaufmann
Christa Sigg, 04.11.2013 16:29 Photos? Please do not! As good as they already are of Angela Gheorghiu. Photo: Cosmin Gogu / EMI

Don't worry, Angela Gheorghiu remains loyal to Verdi, Donizetti and his cohorts. She also sings their arias on Thursday at the Philharmonie

On the table are fruit kebabs. A fabulous figure wants to be cared for, especially if you put it into skin-tight dresses like Angela Gheorghiu. She did photos in the late afternoon but now has no more desire. After umpteen interviews she should also stop talking. In spite of that the capricious singer gave a spirited conversation.

GHEORGHIU ANGELA:  But the most interesting thing you still do not even know. That I'm saving for later.  [She has a secret but does not reveal it.]

You really don't want to say anything? What was the craziest thing in your life?

To marry Roberto! But I should have known; all have told me not to do it.

After all, much has been written about you, which is also PR.

Negative. About cancellations that were due to Roberto [Alagna], such as Zeffirelli's "Traviata".  But that will now all come out gradually. There were moments in my life that gave people a completely wrong idea of me. Now I want to give the real Angela.

When I heard him several years ago for the first time, I was immediately impressed and wanted to sing with him. The fact that he was not well known didn't matter.  I completely trusted this voice, pushed him properly. Then came the "Butterfly" CD.  And everything he tackled was good. Now I am very proud that I trusted him.

Jonas Kaufmann is often heard here, which cannot be said of you.

You have here such crazy productions. If you asked me to sing in "Trovatore" - thank you, never with Angela!  We cannot make jokes with the opera.  Please just stop it!

There is currently in Munich no new production in which you want to sing?

I have a few ideas. The Director's my fan! I adore Nikolaus Bachler, and he adores me. All over the world he has seen me.  He knows me very well. We'll find something, because I love this opera house! It is so wonderful, the acoustics are great. And I also like your food.

But yes, it is close to the Romanian food: pork, desserts - wonderful!

Many young singers come from your homeland, Russia, the former Soviet bloc. Is the training there better?

No, everywhere there are good singers, it's like pearls. You just never know where to find them.

But in the top league at the present time many come from the East.

Sure, because they are not that expensive. At least at first.

What are you going to sing on Thursday?

A little bit of everything.

Have you ever fancied a bit of Wagner, at least in the year of Wagner?

If Wagner were alive today, I would ask him to write something for my voice. Or even a voice! Wagner wrote such beautiful phrases, but as a singer you pay dearly for it. Actually, I would ask Jonas to finish this and only sing Verdi and Puccini.

[As a person of ambiguity towards Wagner, I cannot but laugh at this last paragraph.  I'm good with Jonas singing Wagner, at least so far.  He mixes it up a lot, which seems very good to me.  ]
Posted by Dr.B at 1:52 PM