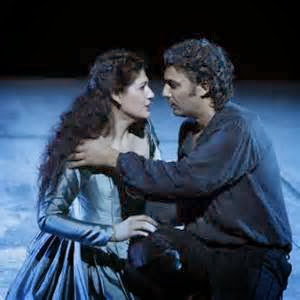 Anja Harteros and Jonas Kaufmann are known worldwide as the perfect couple on stage. Thomas Voigt met the soprano and tenor before the new production of Giuseppe Verdi's La forza del destino. A dialogue on fate, partnership on stage and the eroticism of singing.

MAX JOSEPH Immediately an acid test:  how would you describe in a few sentences the plot of Verdi's La forza del destino?

ANJA Harteros   In the beginning there's a corpse.

JONAS KAUFMANN A situation almost like in Don Giovanni.

JK  who does not want his daughter getting involved with "someone like that."

AH But unlike Don Giovanni the old Marchese doesn't stand against the rapist of his daughter, but has surprised his Leonora when she wants to elope with a half-breed.

JK This man's name is Alvaro. And that the old man dies this time is not murder, but an accident. Or at least that's how it stands in the text. Alvaro drops his weapon, and upon impact it triggers a shot that hits the Marquese.

AH But Leonora's brother Carlos believes that both have the old man on their conscience.

JK This is why they are on the run from here on. As fate would have it, Carlos and Alvaro become thickest friends in the tumult of war, of course, without recognizing it. That the whole thing does not proceed well, you can imagine.

MJ  Are Il trovatore and La forza del destino not siblings? Both pieces play in Spain, both times is the protagonist named Leonora, both times it was a tragic family history from which there is no escape.

JK That's why I think it's good that we do here in Munich both operas within a short time. In November is the revival of Trovatore, and right after that we continue with the rehearsals for Forza.

AH   Maybe dramatically due to significant length compared to Trovatore, but not musically.  Because there are such treasures in the arias as well as in the ensembles.

JK Since the beginning of the Verdi year, I am always busy with the big "Destiny aria" of Alvaro. This is one of the most challenging and most amazing scenes Verdi wrote for tenor, and I find that musically in Verdi's work it faces very strongly forward, namely in the direction of Don Carlo and Aida.

MJ What is fate for you? Is everything predetermined? What makes someone what he is?

JK Of course there is such a thing as powers and forces which no one can overcome. We all know the so-called misfortunes. But if someone believes in something like fate, he does not believe in himself. This is why I think much more of the saying "take your fate into your own hands."

AH Are you talking of career?

JK Not only! But if we want to discuss it on the example of career:  This is made up of many components together, and that includes luck [Glück]. If an artist believes in destiny and says: "I can't influence anything, it is everything that happens to me, already planned by the hand of God," to my mind he eludes responsibility.  I do think that there is something like fate there, but there are just as often situations that you simply must make active use of, the much-cited "opportunities".

AH This says the tenor, who is now on a total flight of fancy. [or maybe flying high] The love of God has given you a great voice, you look great, are sought after - no, you of course have worked everything out yourself, clear!

AH   Of course, you had also to work, but most still have to work much harder to create only half of this, if at all.  So, fate, many are beginning yes to believe in fate, after something bad happens, prolonged illness, loss of a loved one or something similar.  And in such situations, everyone wonders: Why does this happen to me, what have I done to deserve this?

JK  Here faith and superstition strongly come into play. Distress teaches us to pray, they say, and that always reinforces so-called strokes of fate.  In some parts of the world, the term "destiny" is so loaded that one may not call it by name.  For example in Italy you still may not pronounce the whole name of Verdi's opera. Only "La forza del" is said, and one may not hold "destino" in the mouth because that alone could bring bad luck.   But for me fate is not just something negative. The word also includes unexpected good luck.

AH I used to think just like you, but now I am convinced that we do not have much in our hands.

JK I think our views are not so far apart. Believe in Divine Providence in honor, but it must not lead to a fatalism, according to the motto:  Everything is predetermined, I cannot do anything anyway. So unreflective self-service to destiny as an excuse for inaction - that I cannot accept.

AH Drive is okay. But even that is a kind of talent that is given to some more than others.

MJ Since we are in the talent discussion. Is talent really 100 percent a gift of nature?

JK   I do think that it is a combination. There are certainly many people who are gifted by nature much more for our profession than we are - only they have never had contact with classical music, let alone had the chance to be something in this profession. To come back to the initial question: To be what one is, is a combination of gifts of nature and the circumstances in which one grows up.  Related to our work: You may have received from the dear God the most beautiful instrument, but it helps nothing if you do not learn to make music.

AH You can achieve a lot with hard work, but you cannot purchase a lack of talent through hard work. You're either gifted or not.

MJ An example of the positive concept of fate:   you both have found yourselves artistically.

AH Well, now I feel all warm in my heart. (laughs)

MJ Where did you meet?

JK We had our joint debut in Frankfurt, in Cosi fan tutte. [This was mispelled in the original. I'm not translating the mistakes in the text.]

AH And you were terrible! Totally arrogant!  But you sang well. - No, Jonas has had great success. As his career took off, every pose fell away.  Because he had arrived where he belongs.

MJ The next joint opera was the staging of Lohengrin in Munich. You were one in heart and soul. At least when singing.

JK I think we felt in the same moment: It can be like this if you inspire each other and it will together increase more and more.  If you have Anja Harteros next to you, who can implement everything technically, then you can sometimes risk the wonderful piano phrases in the Don Carlo duets as quietly and intimately as it is possible to sing them. And if someone feels the same joy in such subtleties, then that is something out of the ordinary, and that rubs off on the audience.

AH   The Joy, the delightful knowing [das Gönnen-Können] - and the trust! With Jonas I always have the feeling that he never crosses his boots [?] but is always there for me. And such a thing is rare in our profession.  More disillusioning is when in rehearsal one reaches a state of tension, for example in the 2 Act of Don Carlo, and it reaches the moment where it really crackles - and then the director goes in and says, "More to the left!"   This is the quintessential Interruptus.

JK I think our instinct for emotional tension is very similar, so we create in such key scenes as the 2nd Act of Don Carlo, these images that are not only from the director. And if someone is opposed to that kind of emotion and he works strongly against it, then you have a partner next to you who understands. A shared problem is a problem halved. Thank God we are both in the fortunate position that we can positively affect our working conditions. We can to get back to the topic, make our destiny entirely ourselves and actively contribute to our luck.  And the good directors also understand that this is also a key to success.

MJ In La forza del destino you have unfortunately not as much to do with each other:  only a brief duet before the accident and then again at the final trio, when Leonora is already dying.

JK Between, we are on the run. That is with us as with Bonnie and Clyde:  If you see us together, we have also been caught. And by all love for Anja: In this opera the baritone partner is much more important for me.  In Munich, I am fortunate to have one of the greatest baritones of our time on my side: Ludovic Tézier.

AH I am very excited about this new production, my first work with Martin Kušej. I already have a bit of the jitters. I have seen his Don Giovanni in Salzburg, and he obviously loves to bring out the singer physically, and frankly, that's not my thing.

JK I did with Martin Kušej Fidelio fifteen years ago in Stuttgart, then still Jaquino, and I was impressed by how he again and again convinced us of things that were not plausible at first glance. Then I saw some of his productions, I found his production of Franz Schreker's The Search especially strong.

MJ Back to singing: To what extent is sensuality part of the musical harmony?

JK (with the voice of Horst Schlämmer) We talk later, darling!

AH At a joint Don Giovanni in New York René Pape said to me, "You have such a sexy voice ," I noticed this because it made me feel so good, and so I will gladly pass it forward.

AH That's right. But it can also be a very internalized thing, I also like to sing with you without an audience.

JK I would say something to the so-called Regie theater. I have witnessed colleagues who have fought against a director's concept, without proposing an alternative. And I think: With a mere refusal you don't get any further. But only by proposing something different. You should also let yourself be creative, and in most cases it works. Also, by doing this you can very well take your fate into your own hands.