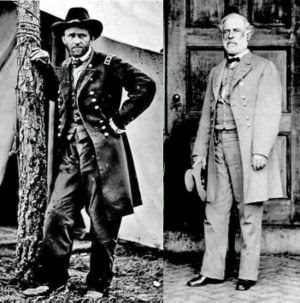 Appomattox Court House in Virginia is the site of the surrender on April 9, 1865, of General Robert E. Lee, shown right, to General Ulysses S. Grant to begin the end of the American Civil War. Philip Glass has written an opera about it called Appomattox.

Presented at the San Francisco Opera, there are moments in this opera of great effectiveness. The opera begins and ends with scenes by the wives of the great male participants. At the beginning they are sure this war will be the last, while at the end they are sure that there will be more wars. People want to think that if a war is vastly horrible, as was our Civil War where more Americans died than in all of our other wars combined, then surely no others will follow. These ensembles were well done.

There was another moment when the Confederates decide to abandon Richmond, Virginia, the Confederate capitol, by blowing up most of the assets. The scene shows crowds of refugees and huge explosions where the actors stare in amazement and sing "aah."

In the battle scenes the Civil War song "Tenting on the old campground" is heard in its entirety.

There is another moment where Robert E. Lee is shown dressing for the occasion of his surrender. He was a southern gentleman whose house in Arlington, Virginia, is now the site of a national cemetery, the one where John Kennedy is buried. Early in the opera Mrs. Lee complains that she can no longer walk in the gardens of her house. Grant was no gentleman, and the contrast between the two men is itself an illustration of the culture clash the war was based on.

There is a famous picture of the room where the signing took place. More vivid in memory will be the scene that takes place in the opera after the signing: all the furniture is stolen and the building is completely demolished.

Into this simple story political events outside the time line are inserted in a kind of random way, especially in the second act. The assassination of Lincoln is anticipated and shown.

The civil rights movement of the fifties and sixties is shown. The war ended but didn't end in the hearts of southerners. If they couldn't own blacks, they would make sure their lives were miserable and degrading. Edgar Ray Killen appears in a wheel chair and describes the murder of three civil rights workers. I remembered that this referred to the murders of two white jews, Andrew Goodman and Michael Schwerner, and one black man, James Chaney, but in the context of the opera it was just a morbid illustration of southern cruelty that couldn't be precisely identified.

And how was it as an opera? It was theatrically effective, at least for an American audience, and never became tedious. It was my second Glass opera in 6 weeks, so I couldn't help comparing them. Orphée achieved moments of great lyricism, moments of beautiful singing, indeed moments that seemed to require singing to make their proper effect. There were no such moments in Appomattox. I retain my prejudice: opera is about singing. I am there to hear people singing. I felt sorry for Dwayne Croft, a fine baritone who looked wonderful in his dignified portrayal of Robert E. Lee, but croaked miserably through the ugly vocal part composed for him. Every note seemed completely thankless. Perhaps Lee should have been a bass. Or perhaps it should have been written with the idea that someone would be singing it. 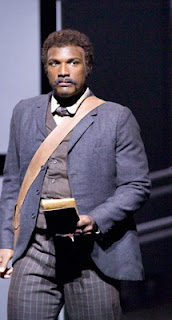 The best work came from Adler fellows. The picture on the left is Noah Stewart, excellent in the role of T. Morris Chester, a black journalist during the Civil War. I have been following him since I saw his performance of Don Jose in Davis. He is a lovely tall tenor that I have wanted to add to my sexiest list. I lack only an appropriate picture. I was previously worried that his voice might be too light, but I see from his work here that he has plenty of power. 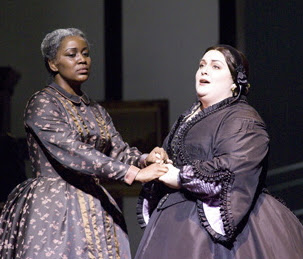 Whenever Glass loses interest in his material, he fills in with the noodle noodle music he is famous for. It's a complete cop out. The writing for voice was bad to ghastly.

Is this a relevant comment? You tell me. I am pondering the fact that all the white characters were portrayed by white singers, and all the black characters were played by black singers. Perhaps this is a coincidence, but perhaps not. Is that really necessary? I think the Civil War still lives.