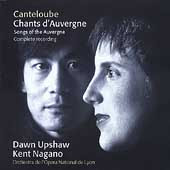 I have been buying a lot of CD's lately, including Dawn Upshaw's Canteloube: Chants d'Auvergne. This is a collection of folk songs from Auvergne, a region in central France with its own dialect, called Auvergnat. Cantaloube's songs are in this dialect, though the liner notes show only French and English. This makes it more difficult to match the singing with the translation.

Dawn Upshaw's main talent is her ability to bring a sense of ecstasy into unusual music, a talent strongly in evidence here. It's not a new recording.

In the mail is Jonas Kaufmann's Strauss Lieder. I'll let you know if I think of anything to say about them.

Florez' Arias for Rubini is out in Europe, but I can't find it here.
#ad