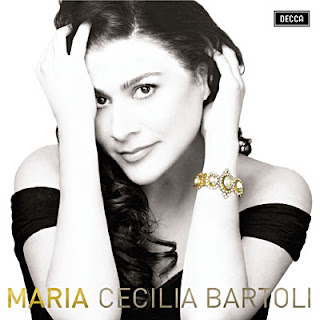 It feels like an obsession, especially the parts where Cecilia projects herself into scenes of Malibran. Perhaps I should feel less self-conscious about my own obsessions.

The music that comes down to us from the past has all been passed through a filter--the filter of "good taste." Certain composers and compositions pass the filtering and vast numbers of others are found unworthy and do not. As a result, we come to the music of any era with no idea of what music was heard then. We hear only the mountain peaks and never the foothills or lower ranges.

Cecilia has been trying to single-handedly change all that. She brings us the other Gluck, the one who wasn't reforming anything. She brings us Mozart and his purported enemy, Salieri. She brings operas by Porpora and Haydn. I confess I had never heard any of these works before Cecilia recorded them.

Now she is bringing us an entire era: 1825-36, the world of Maria Malibran. This world is marvelously international and includes both mountains and foothills. Everything she researched did not make the cut of the album. The English song was excluded, but will show up on the concert series. Rossini, Malibran's mentor, is completely unrepresented on the album. It is my understanding that the concert series will include the Malibran version of the aria from La Cenerentola.

The variety of what is included is astounding. We get expert yodeling done in a style to rival Bartoli's other virtuosic singing. We get flamenco. We get full scale Bellini arias in the Malibran versions. We get Mendelssohn. It feels like a whole world.

The whole world was mad for Malibran. She was Madonna, far bigger than any opera star today.

Cecilia has decided to live out her fantasy and recreate the art of Maria Malibran. This is biting off a very big chunk.

She begins with scholarship, finding the music that most closely represents what Malibran actually sang. She recreates the instrumentation of the era--Malibran was just before the major reconstruction of instruments that took place in the nineteenth century.

Bartoli is recreating herself, too. Who but she would even try this? The first thing you're going to notice is the extreme range. Even in her contralto period Cecilia did not growl around in the low range of her voice like this. The most vivid example of this is in the Hummel variations. The other end of her voice is well represented as well.

It is good for Cecilia to have taken on this challenge. She is the sort of artist who needs challenges. She has taken on the recreation of another era and the art of one of the most famous singers of all time. The result is not Malibran, of course, but Bartoli. Long may she reign.
Posted by Dr.B at 6:55 PM