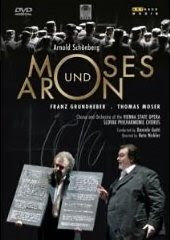 I have bought a DVD of Schoenberg's Moses und Aron from the Vienna State Opera, and it is definitely not a chick flick. It reminds me a little of Anna I who sings and Anna II who dances by Kurt Weill. In this case it's Moses, Franz Grundheber, baritone, who talks and brother Aron, Thomas Moser, tenor, who sings. These two are the only real characters. They are set against the chorus and occasional individuals who break out from the crowd of Jews.

They argue over the nature of God who Moses sees as invisible unimaginable, eternal, omnipresent and omnipotent. It is as if Abraham had never existed. This image of God is presented as the invention of Moses who relies on his brother to present his vision to the crowd. The people have turned to the Egyptian vision of God and cannot believe in this abstraction, but when Aron turns the rod into a serpent, they believe.

The main argument is between the two brothers who appear intertwined both together and in opposition. Aron doesn't seem completely convinced.

The production is minimalist black on black. Each individual in the crowd carries a large photograph of himself and the word ICH [German for I] is drawn on the walls. Worshiping idols is the worship of self. It is unrelentingly abstract and modernist.

They agree to flee into the desert, turn their pictures to the floor and erase all the ICHs from the walls. This doesn't last. When Moses goes up onto Mount Sinai, doubt emerges in a whispered singing and talking fugue from the chorus. They complain loudly that without their old gods there is no law and order.

Aron relents and agrees to give them back their old gods by putting up a giant word ICH. They put on gold outfits and go back to worshiping themselves. Some men commit suicide. Moses comes back with the ten commandments and is pissed.

I'm not high minded enough to like this. The pagans seem to be having more fun, but even they are pretty boring. Remind me--why exactly is it that people like Schoenberg? I rather like Pierot Lunaire and have created midi files for it [the idea was that Sprechstimme is probably as close to actual singing as I could get now], but this is dense and square like blocks of wood. I feel my idea that opera is a chick flick is validated by this.