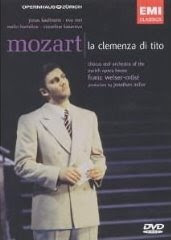 This DVD of Mozart's La Clemenza di Tito from the Zurich Opera has a number of unusual features.

The secco recitatives are known not to have been composed by Mozart, so they have tossed them. We are left with a work of no particular genre--a serious opera with spoken dialog, even rather severely truncated spoken Italian dialog, instead of the intended opera seria. As even the most superficial student of opera knows, Italian is never spoken from the opera stage. "Piu tardi" I think Violetta says after she reads the letter. That's it. No one in the cast sounds convincing speaking Italian.

When we get to have singing, it is rather good. There is a gorgeous duet between Malin Hartelius as Servilia and Liliana Nikiteanu as Annio.

The production is twentieth century Italian fascism with Tito, sung by Jonas Kaufmann (you knew there was a reason I bought this) as Mussolini. Vitelia and Servilia dress formally in evening wear. The male characters wear either fascist uniforms or suits, usually double-breasted. Liliana wears a cute double-breasted pin stripe. The chorus are attired in street wear, the women in short dresses and hats, the men in suits and fedoras. The evocation of the era by the costumer, Isabella Bywater, is astounding.

I bought this for Kaufmann, and he does not disappoint. The ensemble players of the Zurich Opera are very fine. The audience preferred Vesselina Kasarova as Sesto, but I was disappointed with her "Parto parto." She has pockets of intensity in her voice which she does not try to even out. She is particularly manly.

Vitelia, sung by Eva Mei, and Sesto are treacherous, but Tito eventually lets everyone off, an act that seems particularly foolish. It is difficult to know what to make of the juxtaposition of the generous and forgiving Tito with Mussolini. Perhaps we are just to feel the militarism of dictatorship rather than the specifics of World War II. Or are they trying to tell us something?
#ad