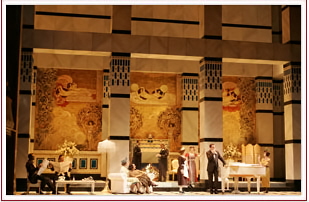 La Rondine means the swallow, a small bird of graceful flight that travels long distances each year between its summer quarters in the northern hemisphere and the southern regions where it winters. It swoops and dives to catch insects in flight.

The opera that carries its name, Puccini's La Rondine, performed last night at the San Francisco Opera, is similarly graceful and fragile, rather like feathers falling to earth. It seems to have been waiting for a suitably graceful and equally fragile soprano to bring it to full flower. Angela Gheorghiu is that soprano.

Her character, Magda de Civry, has chosen the life of the mistress of a rich banker while continuing to fantasize about true love. She remembers an incident in her youth when she met a young man in a dance hall, danced with him, fell in love with him and left him all in the course of an evening, and she longs to bring this moment back to life. She wants to fly free like the swallow. It is a plot much like La Traviata but infinitely lighter. To succeed the opera must make you believe that she is romantic enough to entice a young man, noble hearted enough to give him up when he asks to marry her, and beautiful enough for her banker to take her back. In 1917, the date of La Rondine, we still believe in the woman as slut or angel, and cannot allow her to be both.

Angela owns the famous aria "Chi il bel sogno di Doretta," which is sung as an entertainment at a salon. She is suitably youthful looking and waltzes like a dream. Her voice is a bit small for the San Francisco Opera house, at least from the balcony perspective. I think the acoustics are different in different parts of the house.

The opera is full of waltzes and dancing, a surprise for Puccini. The maid Lisette was amusingly played by Anna Christy, a coloratura soprano. The poet, sung by Gerard Powers, sneers at romantic love and declares his love must compare to Galatea or Berenice. In reality he is interested in Lisette. When Magda, her young man, the poet and Lisette are together at the dance club in Act II, Magda pretends to be someone else, and all appear to go along with this. Then when Lisette and Magda's young man are away from the table, Magda whispers teasingly to the poet "Galatea, Berenice," giving her disguise completely away. He tries to make excuses but has revealed his own romantic tendencies.

The tenor, Magda's young man, is sung by Misha Didyk. His voice is unusual but suitably romantic.

It is an opera about romantic love in the midst of the more sophisticated and cynical classes, a feat difficult to bring off successfully, but definitely managed here, thanks largely to Angela.

The production was art nouveau and very beautiful. Ion Marin, the conductor, sounded familiar. It turns out he conducted the Rossini Heroines album.