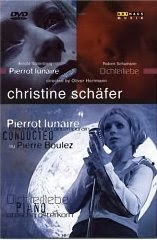 I have a relationship to Schoenberg's Pierrot Lunaire. I decided years ago in my synthesizer phase that if my voice was gone I could still do Sprechstimme. I would record midi files of the songs and perform them to my own accompaniment. I got pretty far along with this project and thought they sounded good. I couldn't get the waltz to sound like a waltz, but I notice they don't either. This project was fun. Pierrot Lunaire sounded good on synthesizer.

This DVD is a film with Pierrot Lunaire as the sound track. The visuals are of New York City around Times Square. Christine walks down a hall in a seedy building; she shakes a doorknob and a lion roars; she goes to her apartment, and it's filled with giant cockroaches. I've been in New York apartments and this is not unrealistic. The real cockroaches are maybe not quite this big. She brushes one off her neck.

Christine is both subject and object in this film. She has a life and observes it at the same time. At one point she repeatedly pushes herself off the top of one of the tall buildings. This is completely wacko and I love it. Her rendition of the piece is fabulous. I am beginning to understand Christine. It's conducted by Pierre Boulez.

Here is the bit I saw on TV that led me to buy this.

I suppose a girl baritone would not be right in the part. Girls, if you are a lyric soprano with good German diction, it would not hurt your career prospects to try your hand at Pierrot Lunaire or Lulu.
#ad