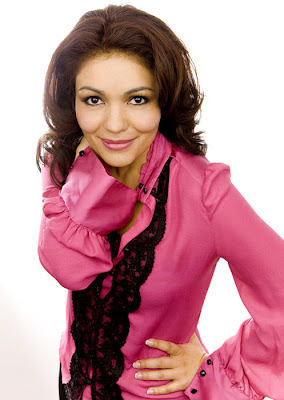 La Bohème at the Los Angeles Opera was preceded by a very nice lecture.   I did not write down the man's name.  He talked about the literary source for the opera, Scènes de la vie de bohème by Henry Murger, and how Leoncavallo also wrote a La Bohème which Puccini stole the plot of.  He told us that women with tuberculosis, especially when they appeared emaciated and close to death, were believed to be intensely sexual.  Thus all the operas about them.  He said Puccini tried very hard to make the story of Mimi not sound like Violetta.  His examples were all from the recording with Jussi and Victoria.

I went for Ailyn Pérez, the soprano who sang Mimi.  She sounds, looks, acts and phrases extremely well.  So is she the next big thing?  The answer is probably.  Her singing is very high class, and her voice is gorgeous.  I heard a lot more sotto voce than I like, but this can always be blamed on the coaches.  Sing big, and ignore anyone who says not to.

Other not insignificant people in the cast are her husband Stephen Costello and the Musetta Janai Brugger.  Ailyn and Stephen are well matched as a singing couple.  They both have the budding spinto sound everyone is looking for.  They look and sound well together.

This was the most romantic La Bohème I have seen.  When it comes time for "O soave fanciulla," they step out onto the roof overlooking the Eiffel Tower, and the house moves back to reveal a giant moon.  This production feels the most like Paris of any I have seen.

Most outrageous is Musetta whose scene is dramatically enhanced to the point of slapstick.  I loved it.  Mimi died on her chord.  Mimi dies when no one in the cast is paying any attention.  Musetta brings in the muff, puts it on Mimi, and then turns back to talk to the others.  What else could this chord possibly be?  I hate it when the director doesn't know this.

I often get tired of seeing the same operas over and over, but this one was worth the trip.