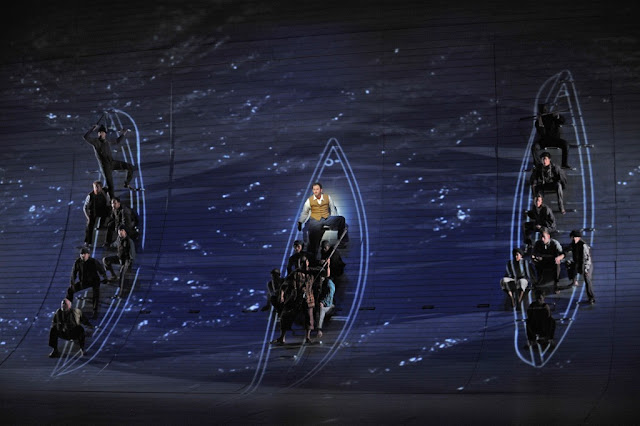 I google everything and was disappointed to find that Kokovoko is not a real place.  We know only that it is "south and west."  For it is the complete sense of reality, of truth, of real people living out their true lives that permeates Jake Heggie and Gene Scheer's opera Moby-Dick now at the San Francisco Opera.

The opera begins with Prince Queequeg praying, keeping Greenhorn awake, and they become great friends. These men all live in our hearts as few theatrical characters ever do.  It is an opera, a great opera, because it portrays overwhelming, fatal madness in the character of Captain Ahab. In the libretto the mad Ahab speaks in poetry while others are prose.
I include this picture of the cover of the score because it is as close as we will get to seeing the whale who is the object of Ahab's obsession. 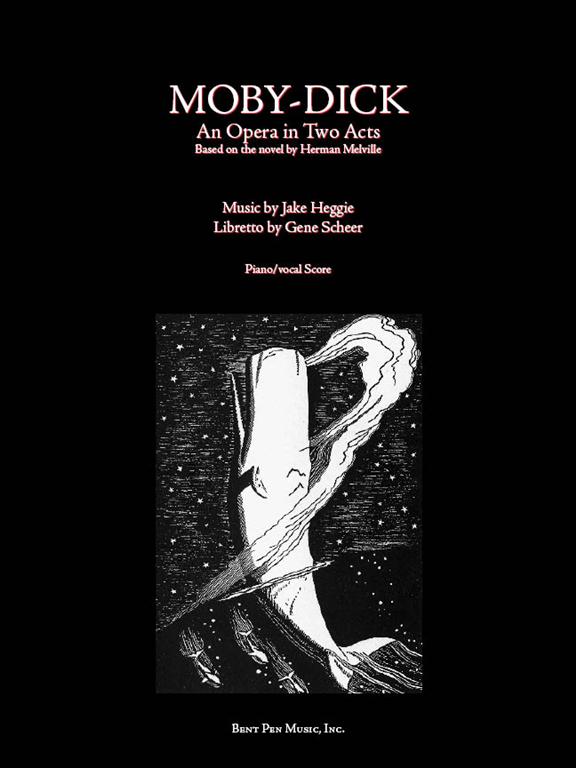 The evocation of the sea in these sets and this music is complete.  Kudos to Robert Brill and the others who created the production.

The casting is genius.  Jay is creepily wonderful as Ahab.  Stephen Costello is perfect as Greenhorn.  Morgan Smith completely projects the sensibility and sentimental desire to return home of Starbuck.  And if Jonathan Lemalu isn't from a south sea island, he should be.

There is madness.  There is the gorgeous soaring orchestra.  There are arias and duets.  There is spectacular male chorus.  There is even a soprano who plays Pip:  Talise Trevigne.  There is death.

I think I shouted for everyone, including Heggie who appeared at the end.  Conductor Patrick Summers was excellent.  I formally declare it to be the first operatic masterpiece of the 21st century.

Jonathan Lemalu was born to Samoan parents in Dunedin, New Zealand - my home town, where his singing teacher, Honor McKellar, is still a driving force in the music scene at 91 years of age.

Let's just say I got a little carried away. Strictly speaking L'Amour is 20th century, since the century starts in 2001. Oh well. I do love it, though.
Ainadamar is being done in the Bay Area this year. This is a not to miss. I can't rank it without seeing it.
Thanks for not including Doctor Atomic.

Dr A never even occurred to me to mention; funny about that, neh?
M&self did see Ainadamar in Santa Fe a couple years ago, not sure what I think of it. will be interested to learn your reaction. (The company that's performing it in [the real] SF is Ensemble Parallele, which certainly deserves high marks for courage, if for nothing else; we did like their Gatsby.)