Netrebko in a Top Hat 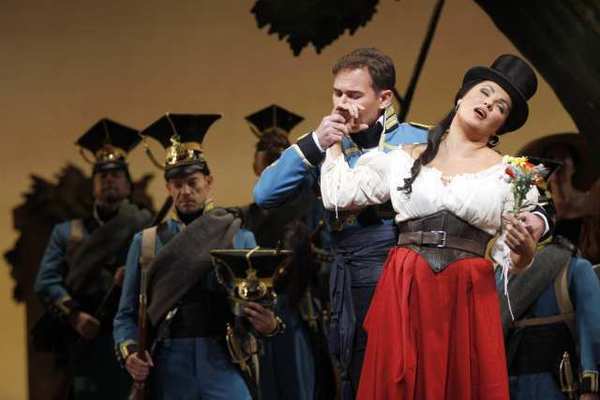 The first question you ask when you watch L'Elisir d'Amore live in HD from the Metropolitan Opera is What is Anna Netrebko doing wearing a top hat? Besides looking cute in it.  I decided it was there to show that she was the boss, that she is running this farm.  She orders people around.

Since I started this blog, I have seen Elixir of Love in the DVD with Netrebko and Villazon from Vienna, a straight presentation which focuses on Nemorino; the charming modernized version from the Santa Fe Opera where Adina is a school teacher and Nemorino repairs cars; the slapstick comedy version from the Sacramento Opera which I thought completely did not work; and this one from the Met which I liked very much.  I agree completely with the talk at intermission--I want to care about them, and I can only do this if they are reasonably serious.

They are two people virtually obsessed with one another.  He stares longingly at her, and she furtively stares back.  In this production she has her little black book.  She is a woman who likes men.  She does not like being whined over.  It is immediately obvious that she loves him.  We really see the tear that he sees--a first for me.

In Vienna Netrebko was blocked up high on the porch of her house, made insignificant by her placement on the stage.  Adina is the main character.  Or rather Nemorino and Adina share the spotlight equally.  The focus on Netrebko brought this production to life.  She still moves well, sings well and makes us laugh and cry, but her voice is moving away from Donizetti comedy into heavier repertoire.

Mariusz Kwiecien as Belcore, shown in the picture above, was just right in this part. He sweeps Adina off her feet with great style, what she wishes Nemorino would do.

Matthew Polenzani as Nemorino is not really the perfect partner for Netrebko.  He sings the role beautifully, but he whines too convincingly.  At the end we need to see him show more confidence.  Then we will believe that he is the one for her.  Perhaps it will work out, perhaps not.  There's always the little black book.

In the intermission Debbie Voigt was interviewing a tall bald man with an English accent about Thomas Adès' The Tempest which is currently in rehearsal.  He was ornamented by a tall, absolutely gorgeous woman who simply stood by his side.  Who could this be?  Finally at the end Debbie turned to her and called her Isabel.  Of course.  That's Isabel Leonard.  Wow.  It would help if I paid more attention.
Posted by Dr.B at 7:11 PM

I went to the rerun and enjoyed Polenzani a lot more this time. The technical glitches where horrible, but they reran the entire opera after fixing them.