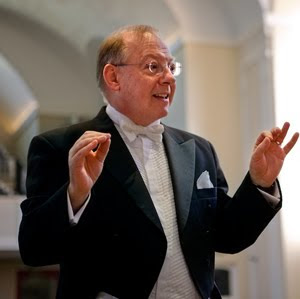 I'm weirdly inadequate as a critic.  A real critic forms his opinions, throws around a few adjectives and goes on the the next thing with no backward looks.  I always want to know why I liked it, or why I didn't like it.  If I can't figure out why, I'm uncomfortable.  It's the systems analyst in me.

So today I am mentally comparing last night's performance of Purcell's Dioclesian by the Philharmonia Baroque Orchestra in Berkeley, conducted by Nicholas McGegan, with Cecilia's Mission.  Purcell (b. 1659) and Steffani (b. 1654) are very close in age.  With Steffani we get mostly arias and duets with bits of orchestra and chorus, while with Purcell we get arias, duets, choruses, trios and all manner of instrumental numbers.

Purcell and Steffani often separate out the instrumental and vocal parts into separate numbers with completely different music.  It is quite common for an aria to have only continuo accompaniment, which nowadays means a realized figured bass played on harpsichord, cello, and theorbo.  And that's it.  No winds or violins, a very thin sound, like recitative.  Which we mostly don't get in either environment.  Purcell is writing for a play, so instead of recitative there would be talking, omitted in our performance but summarized in the program.

The ornaments come in unpredictable places to illustrate the words, and not in the da capo repeat.  Because there isn't one.

I find this all fascinating, but you are probably nodding off.  I am surprised to see so much structural similarity between the two composers.  Purcell shows a lot of French influence with lots of dotted rhythms.  I am surprised that they sound so similar to each other.  Except one has Cecilia and the other doesn't.

Purcell writes all kinds of duets--duets for countertenors, baritones, soprano and tenor, and most interesting for me--two tenors.  Why do we never hear this?  Of the soloists, I most enjoyed the two tenors Brian Thorsett and Jonathan Smucker.

And now I am all Baroqued out and listening to Beethoven.  Whose arias are structured like Rossini.
Posted by Dr.B at 10:50 PM