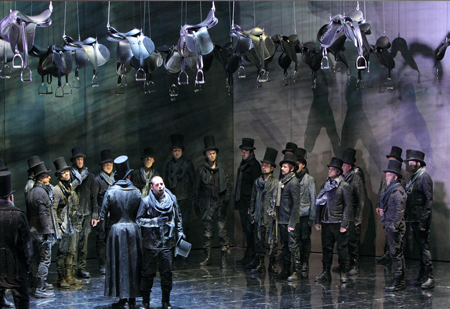 Or Bellini's I Capuleti e i Montecchi at the San Francisco Opera.

We studied the Guelphs and Ghibellines in my class in Florence. The Guelphs, represented here by Giuletta's family the Capuleti, support the Pope, and the Ghibellines, represented here by Romeo's faction the Montecchi, support the Holy Roman Empire. So you see it isn't just two families that don't like each other. It's a war that went on in Italy from 1140 to 1289. Then the Guelphs won, split into two parties and went on fighting with each other. Dante was on the wrong side of this part of the war. In the 15th century they were still at it.

You don't need to remember any of this, but to Shakespeare in the late English Renaissance it just looked like a silly family quarrel. We're not doing Shakespeare. Romeo killed Juliet's brother in a battle in the war, but her father still does not want her to marry Romeo. By 1830, the date of the opera, this was Italian history.  When the opera begins, Romeo and Juliet have already met and established their relationship.  I am reminded of Rossini's Otello which similarly omits all the happy parts.

We start off with saddles hanging in the air, see top.  I think this is supposed to tell you we are doing war with horses and not just a street fight.  The men all wear top hats which places the setting in the nineteenth century. You can see in the top picture and this next one that the way the sets are painted is very attractive.  In the picture immediately below, for the second scene with the gorgeous love duet, we had a sink attached to the wall which Nicole Cabell climbed on. 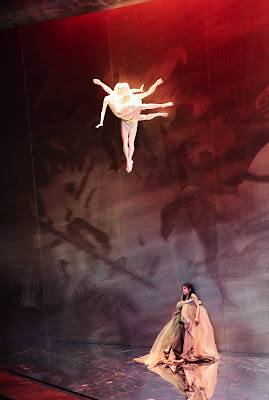 I had to search for quite a while to find a picture that shows Juliet's costume in the second scene, below worn by Netrebko in Munich.  You can see above that the floor in this scene is quite shiny, allowing us in the balcony to see up Juliet's dress, which hovered around her reflection like a halo.  The director always sits in the orchestra.  Just thought I would mention.... 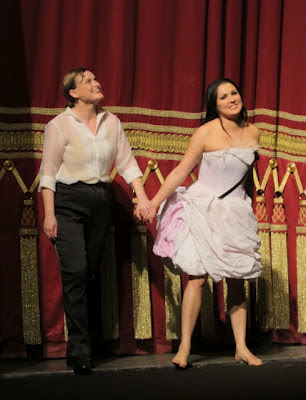 Below is the wedding scene with lots of supers dressed in outfits by Christian Lacroix.  The men are chorus, the women supers who don't sing.  Thus the flowers stuck in their mouths.  We are mystified. 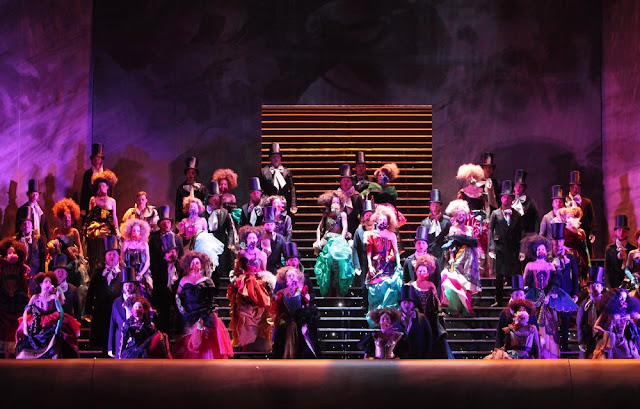 In the picture below you can see this same flight of stairs from the other side.  People walk from above down into the slot below.  Nicole played this scene walking in her bare feet across the top of this narrow ledge.  She looked nervous.  You can also see the director's island in the middle of the orchestra. 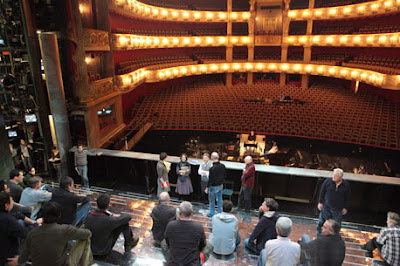 Juliet is the only female character in the opera, and she is written as insane throughout.  In the bel canto it is difficult to find a normal woman in any of the operas.

I insist the production is to explain the opera.  Maybe you could get used to this, and it would start to seem normal, but for me this one just draws your attention away from the action.  Why is that there?  Why are saddles hanging in the air?  Why are we in Juliet's bathroom?  What is that moon sticking up out of the floor?

All is forgiven.  One reviewer actually dinged Eric Owens.  Go figure.  He sings everything under the sun, but is most magnificent in Wagner.

The singing was magnificent, especially Joyce DiDonato as Romeo and Nicole Cabell as Giuletta.  Their voices are gorgeous together and separately.  It's hard to believe that this was Nicole Cabell's San Francisco Opera debut.  Joyce is getting her masculine swagger down.

The conducting was by Riccardo Frizza who only occasionally allowed the orchestra to play too loud.

It made me very happy.  More bel canto, please. 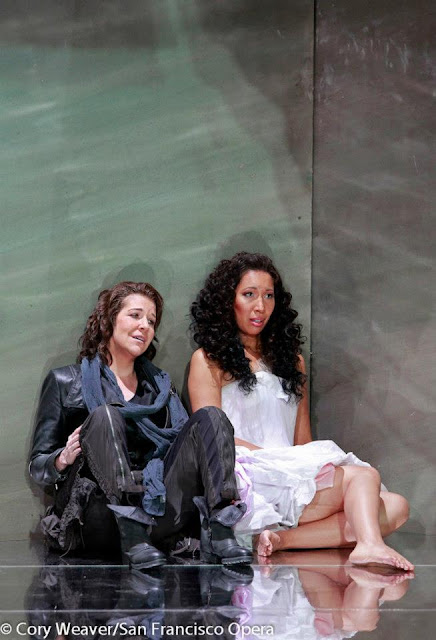 It's only fair to show our stars.
#ad