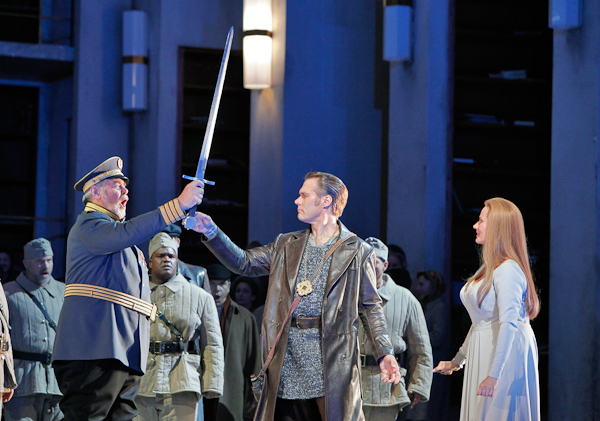 The purpose of the production is to explain the opera to us.  Above are King Heinrich (Kristinn Sigmundsson), Lohengrin (Brandon Jovanovich) and Elsa (Camilla Nylund) from last night's production of Lohengrin at the San Francisco Opera.

He looks like a knight and we are supposed to not be able to guess that that's what he is.  Our Lohengrin from last night looks like a homeless person who can afford a well fitting leather jacket.  He's very handsome but not very likely.  For me this does a much better job of explaining the opera.  He comes when she asks for him, does a fine job of rescuing her, tells her he loves her and wants to marry her, but just doesn't look right.  So when she asks him his name, we are not really surprised.

This production also emphasized the militaristic pieces of the story, something that I don't think I can recall from other productions.  In Munich with Jonas Kaufmann everyone seemed to be wearing t-shirts.  Here they look a bit like Nazis in their brown shirts.  The King is there to recruit fighters for the war with Hungary, and this became clear as never before.

The swan that turns into a boy was also quite clear.  I thought it was the easiest to follow Lohengrin I have ever seen.  It was just boring and ugly looking.

Complaint:  the super-titles were virtually unreadable.

I enjoyed all of these singers, though I found none of them spectacular.  Camilla Nylund I had seen before in Fidelio at the Zurich Opera.  In the wedding scene Lohengrin and Elsa look exactly like the couple on the wedding cake.  Too bad it doesn't last. I didn't cry.

The orchestra sounded thick and muddy.  This is the biggest problem with Wagner.

The best thing at the operas I have seen this fall is unquestionably the chorus work, especially the men.  Moby-Dick is all men, of course, and I think perhaps Capuleti is, too, but Lohengrin also has more male than female chorus.  But guys, show some sympathy for the soloists and tone it down a bit.