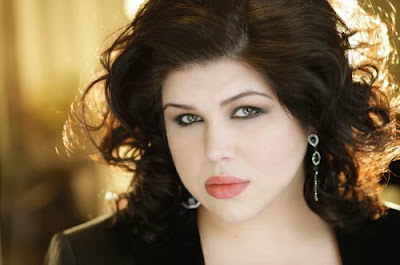 Three songs by Richard Strauss
"Die Nacht," "Morgen" and "Cäcilie."  I apologize for having a coughing fit in the middle of this group.  I got out as fast as I could.  My cough drops didn't work.

Marietta's Lied from Korngold's Die tote Stadt.  This piece is becoming common for me.

Eternal Recurrence by Gregory Peebles.  This is a piece written for Leah.

Encores
"Can't Help Lovin' Dat Man" by Jerome Kern
"Have yourself a merry little Christmas" from Meet me in St. Louis.

Leah has a voice of operatic proportions, and she chose pieces which suited both her voice and her musical loves.  The music included classic American pop songs, including one done expertly in dialect.  I'm seeing a lot of Obradors lately.

The new cycle by Gregory Peebles would have been helped by printed text.  We couldn't tell when the songs ended.  I would describe the style of this group as post modern.