Jamie Takes it All 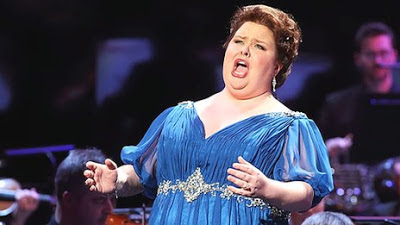 At last there are films of Jamie's final at Cardiff Singer of the World.  This is so you can see what the fuss is about.

Jamie Barton has taken everything at Cardiff Singer of the World.  Listen here for a sample.  My entire acquaintance with her and enthusiasm for her singing came from her appearance at the Richard Tucker Gala.  I can't help being partial to mezzos because they always sing pieces I used to sing. Also, can it be a coincidence that she sings all this British music?  I think not.  Here is Purcell arranged by Britten.  These two clips are from her final competition performance.

In other news, we know from Norman Lebrecht that Jonas Kaufmann has switched labels from Decca to Sony and will soon release a Verdi album at Sony.

A problem yet again. I watched the Barton yesterday. But when I went to it to listen again, it didn't work. Sigh.

Try more than once. Sometimes problems are temporary.