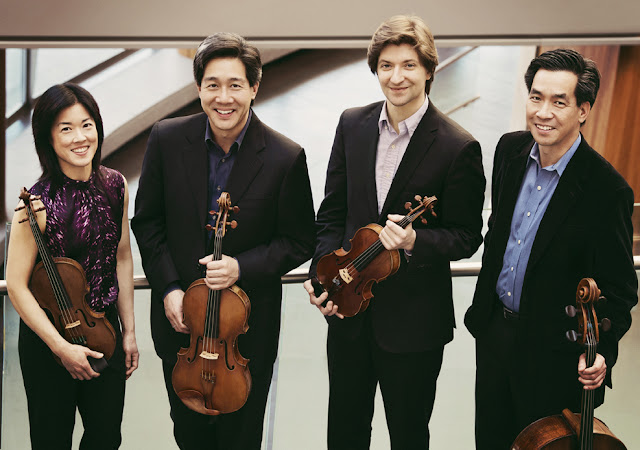 You could call them The Ying String Quartet, I suppose.  They started out as a family enterprise, but now the first violinist is not a family member.  They are Janet Ying (violin), Phillip Ying (viola), Robin Scott (violin), and David Ying (cello).  For our final New Millennium Concert Series program at Sacramento State we enjoyed this excellent quartet.  They are my favorite of the recent chamber music groups I have heard.

String Quartet No. 2 in D Major (1881) by Alexander Borodin
This piece sounds familiar because a couple of the movements provided source material for the musical Kismet.  It's also just very beautiful music from the high Romantic.

String Quartet No. 2 in F Major Op. 92 (1941) by Sergei Prokofiev
This is pleasingly modern but not too modern since it's based on Russian folk tunes.

Quartet in C Major, Op. 59 No 3 (1808) by Beethoven
This is one of the Razumovsky string quartets commissioned by a Russian Prince Razumovsky, thus continuing the Russian theme of the concert.

The selection of repertoire is part of what made this concert particularly pleasing, along with the beautiful romantic playing.