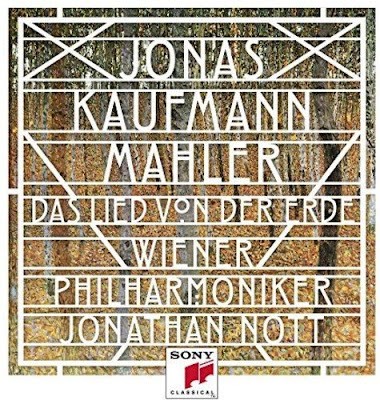 Anyone would want to sing "Der Abschied."  I used to play it in piano reduction even with my pathetic keyboard skills just for the joy of making this music.  It's one of the great things.  So it isn't hard to understand why Jonas Kaufmann would want to.  Perhaps he reads the idiotic comments where people tell him he's a baritone.  He isn't.

So this is sort of a stunt recording of Mahler's Synphony Das Lied von der Erde (1909).  It is important to remember that the expected voicing is tenor and alto.  I like Janet Baker.

Don't get the wrong idea.  I love Jonas Kaufmann, but I think it is the operatic dramatic tenor Jonas Kaufmann that I most love.  Here we have Jonas in his two most prominent incarnations:  Verdi tenor and pop song crooner.  Alternating.  His renditions of the tenor movements are great.  His renditions of the alto movements aren't.  He isn't a baritone because he doesn't achieve any intensity in the baritone tessitura, and he can't really do the low notes.  Sorry.  It's pleasant but not thrilling.