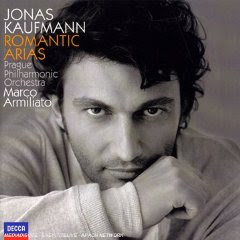 What should I say about Jonas Kaufmann's Romantic Arias? I love it as much as I hoped I would. The rendition of the Prize Song is very unusual.

I am able to see both sides of the controversy concerning Jonas. For me he is the real thing--an artist of great gifts and great originality. The chief attraction for me is the amazing beauty of his voice. I simply adore it.

His style is also fascinating to me. At various times on this blog I have encouraged performers to find their own way to expression, their own personal approach to the tools of expression. For my ears Jonas does this. He isn't doing mere imitations of other singers. He doesn't scoop and slide as much as a real Italian would in Italian repertoire, but does that mean he should? He projects as a German singer in all repertoire, one of the reasons I predicted he would evolve gradually into a Heldentenor. Expression must come from the heart and not be imposed from the outside from the performances of other singers. IMHO.

I hear true feeing in his voice. He successfully makes me hear the music again.
#ad

I give you a big hug for this!
Peter
(from Good Old Germany)