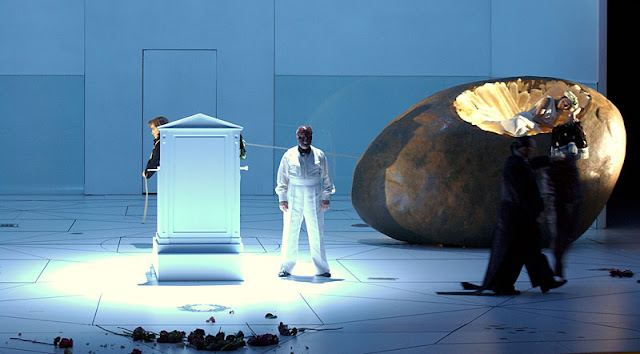 I decided I should give the Paris Opera Susan Graham DVD of La Clemenza di Tito another try. The production is very formal and palely classical. The costumes are periodless--vaguely nineteenth century. There is real fire on the stage for the riot. The cast includes Christophe Pregardien, Catherine Naglestad, Hannah Esther Minutillo, Lorenzo Regazzo, and Sylvain Cambreling.

Susan Graham is very intense for the music, perhaps, but sang the part far better than Kasarova, reviewed elsewhere. Vitelia is noticeably too low for Catherine Naglestad. Christophe Pregardien as Tito is pretty mediocre. Basically you would want this for Susan Graham who is showered with flowers at the end.

But what the hell was that baked potato with the woman sitting in the butter for? It went across the stage for no apparent reason during the first act. I hate that.

I am so pleased to have found this picture of it.