The Voice of Now 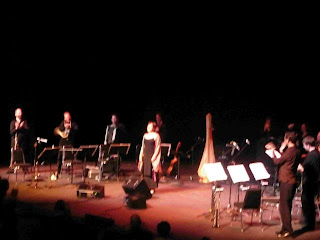 I attended a Cal Performances concert last night at Zellerbach Hall in Berkeley that featured three pieces performed by Orquesta Los Pelegrinos, orchestra of pilgrims, one with Dawn Upshaw. All three were fascinating, probably in ascending order. Ms Upshaw and the orchestra are touring these pieces around the country.

All three works involve electronic music in one form or another. The audience experienced the electronics through the auditorium's sound system, but the musicians were aided by speakers that pointed back toward them. Clearly we are in the realm of today.

There are unusual features galore. The first two works featured a prepared Steinway grand piano, an idea invented / popularized by John Cage that involves making physical changes to the piano that alters the sound. In Meanwhile the sound was muffled by padding the hammers. The prepared piano in the second piece was a more traditional mixture of distorted sounds and strumming on the strings. Imagine--John Cage now represents a tradition. This is a sign that one has lived too long. The player was a young woman named Lisa Kaplan who came attired in jeans, a black blouse and high heel boots.

First is Meanwhile (2007) by Stephen Hartke.

Is there anything else I can say about Meanwhile besides that it used prepared piano? The piece is described as incidental music to imaginary puppet plays. Imagine any play you like. The viola is tuned a half step lower than normal.

Percussion is vital to this sound scape work. The flautist and clarinetist eventually turned into percussionists by the end. The percussion ensemble included a lot of wood tones and an invented electronic instrument. The sound ideal seems derived from gamelan. It was fun.

Second is Vox Balaenae (Voice of the Whale, 1971) by George Crumb.

Have you heard whale songs? Judy Collins once had a song that included them. They are eerie and mysterious. When you were listening to them, did you imagine these sounds could be produced by electronic flute, cello and prepared piano? In the presentation of the theme the flautist, Timothy Munro, played and sang through his flute to produce some pretty bizarre sounds. The tunes clearly come from the whales themselves, but it is the phrasing that makes you actually feel whale songs. I would not have thought this possible. There were no recordings of whales included in the performance.

This piece was played with the lights dimmed and the players blindfolded. One is to imagine oneself deep in the ocean. They walked off with their blindfolds still on, though I think the pianist may have been cheating. The masks and dim lighting are suggested by the composer. Nothing is said about any possible role for extemporization, so I assume they memorized their parts.

The most curious sentence in the program says that "George Crumb is one of the most famous composers of out time." I am even more out of the loop than I thought.

If they'd said Osvaldo Golijov is one of the most famous composers of our time, I would have believed it.

The orchestra expands to eleven players, including Jeremy Flower on laptop computer who adds recorded elements when they become necessary. This is a very tricky job which he pulled off expertly. His part included Dawn Upshaw singing with herself. Percussion is also vital to Ayre, and it is curious that the percussionist hid on the floor behind the double-bass player. Was this to prevent us from knowing how much of the rhythm came from him and how much came from the laptop?

Ayre is deeply middle-eastern, fundamentally monophonic with several players providing the same melody, rather like Turkish music with a much more high tempo, driving rhythm. In my CD review of this piece I compared it to Klezmer, and this still feels right. 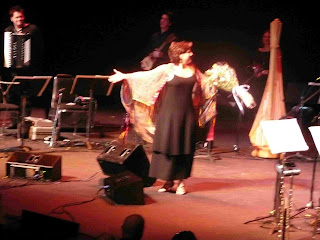 It was wonderful to see and hear Dawn Upshaw. She stands in the middle and leads her ensemble in a way that can only remind one of La Bartoli. I'm glad she figured out a way to present this cycle to the public. It's very exciting. It is her ability to immerse herself in the style that makes this work. All is done without compromising classical vocal technique. Best wishes.

I'm going on and on. And I haven't said anything about the hyper-accordion. The entire concert was completely fascinating. I have a feeling that this is what passes as classical music in the twenty-first century. There are apparent connections to whales, klezmer and gamelan, but connections to classical music as we know it were not there.
Posted by Dr.B at 2:53 PM