Barber of Seville from Ireland 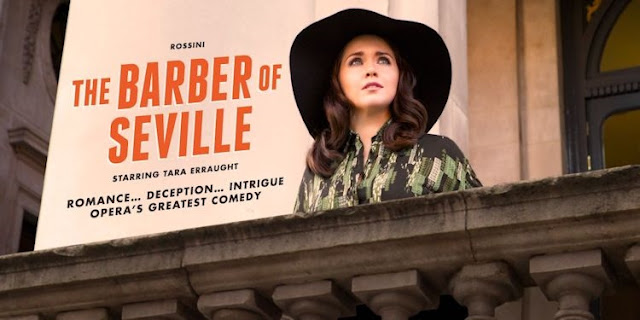 Il Barbiere di Siviglia by Rossini has come to me by way of the Opera Platform.  This is a new production from Dublin’s Wide Open Opera and stars the Irish singer Tara Erraught. I am a fan.  I first saw her live at the Bayerische Staatsoper in Jenufa where she was a member of the company.  I saw her in the stream of Der Rosenkavalier from Glyndebourne.  Die schweigsame Frau from Munich was also viewed as a stream.  None of these showed her in her primary Fach which is coloratura mezzo.  At last we are there.

I enjoyed this production.  I kept puzzling over the dates.  We are in the Seville of Francisco Franco who died in 1975.  We have a VW bus and portable synthesizers, Roland and Suzuki.  So sixties?  Rosina's tutor is a record producer, it seems, and she is his star.  At the start we see her being followed around by groupies.  Perhaps Almaviva is one of her groupies.  The set changes when stagehands come out and reverse the set pieces.  Either we are outside with the poster of Franco, the balcony and the VW bus, or we are inside the recording studio with best selling records on the walls, equipment and synthesizers.  This worked pretty well and was easy to follow.

My only production related problem was during the opening of Rosina's big aria when loud clomping provided a background to Tara's singing.  She is quite fine in this role, with excellent coloratura and big tone.  She is unquestionably the star here and received the most applause.  She convinced us that she could actually play a keyboard while Almaviva disguised as Lindoro did not.  Don't get the wrong idea:  I liked both Gavan Ring as Figaro and Tyler Nelson as Almaviva.  I think the latter is harder to cast.

This sprang up suddenly on Opera Platform, so catch it now.