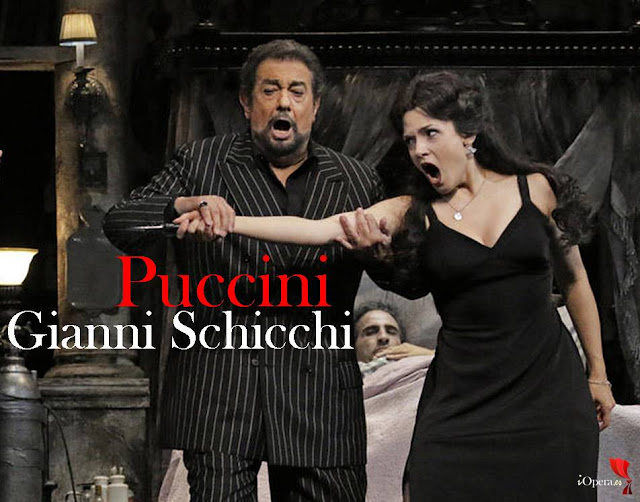 This production from the LA Opera of Puccini's Gianni Schicchi is by Woody Allen.  Which must mean he goes to the opera.  I like the wonderfully gangster look of Placido Domingo in his pinstripe suit.  They take the body out and set it up like a beggar in the street.  This comes with the joke of people dropping coins into the tin cup.  The house has a view of the duomo and must be across the Arno and up the hill on the other side.

Meredith Arwady is featured here.  She has an amazingly boomy voice and is a terrific actress.  Andriana Chuchman threatened to throw herself in the Arno in great style.  [This means her "O mio babbino caro" was nice.]  Those of us who have spent time in Florence love the many references to the city throughout this opera.

Schicchi steals Buoso's house from his relatives by pretending to be him.  Buoso has died and left everything to the church.  So Schicchi gets the doctor to think Buoso is still alive and then dictates a new will to the notary leaving almost everything to himself.

Then Schicchi throws everyone out of "his" house.  Then Zita returns and stabs Schicchi.  I'm too logical.  Am I the only one who understands that for the house to belong to Schicchi, Buoso's body must reappear in the bed before the doctor returns after dinner.  Then he will be declared dead and the new will read.  Killing Schicchi won't get Zita the house.