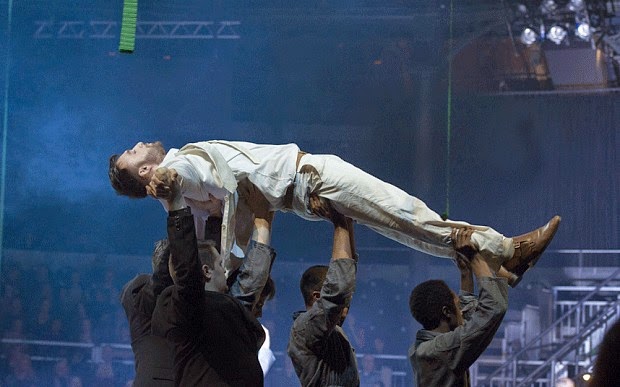 Today I streamed part of a performance in London by the Early Opera Company of Montreverdi's Orfeo.  I want to sing or maybe even shout its praises.

It was translated into English, and the translation was beautiful and poetic.  Subtitles were provided which doesn't always happen with a live stream.  I saw this work previously at ENO and Glimmerglass, so I have probably never seen it in Italian.

I studied all about this.  These guys got together and "invented opera."  What they actually invented was recitative since all the other parts would have already existed.  There are videos of their operas, but they do not prepare you for this incredible work.  Monteverdi's later operas, Poppea and Il Ritorno, are composed for the new commercial theater in Venice and don't create the same effect at all.

It is like nothing else.  The other all recitative operas by Peri and Caccini are never performed, so it is impossible for the style to become trite.  The music shows no hints of the contrapuntal style of the late Renaissance, nor has it progressed to the later fascination with tonality of the Baroque.  It is simply expressive melody.  Monteverdi has simply grasped in his great musical genius the infinite possibilities of this new idea of recitative.  He knows that music is first of all for the soul.

The subject is music, fate, love and death--Orfeo and his Euridice the framework.  He brings us their passion as if it came directly from their hearts.

The music was especially well done and lost absolutely nothing from translation.  The staging was effective:  a bit dark for my computer screen but very theatrical and dramatically clear. The movement was somewhat extreme, but not confusing of the drama.  The singing was beautiful and the diction very fine.

On his arrival in hell Orfeo sings a long, for our ears very unusual aria filled with the ornaments of this long ago era, accompanied mostly by what seems to be his lyre but includes at least 2 theorbos.  Why should this strange music be so deeply moving?  The extreme beauty of this performance goes greatly to Gyula Orendt, an intense singer with a beautiful presence.

This version of the story seems to be missing the usual scene of Orfeo leading Euridice out of hell.  They meet and immediately start talking to each other.  The gods are angry and throw him out.

I recommend finding a place in you life to contain this unique opera.  Of my three Orfeos this is by far the best.