If it's Tuesday, this must be Belgium 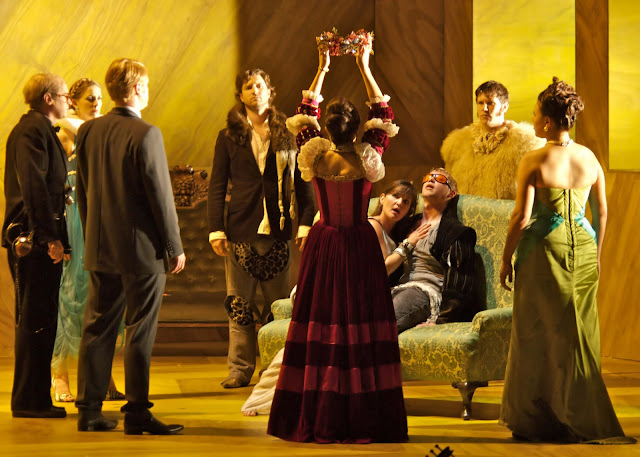 Seated on the sofa are Orfeo and his Euridice after their marriage. Shepherds are in the background, and the media guy is on the left.


I am at Glimmerglass. I am doing four operas in three days, and already I have seen three. It's hard to know where to start.

I have inside information. I am staying in a house with members of the orchestra. I started with Monteverdi's L'Orfeo, and I have been told that the director, Christopher Alden, discussed his ideas about the opera with the ten member ensemble and told them he saw Orfeo as a kind of Kurt Colbain character. Then the cast members extemporized the rest.

The resulting staging was the complete opposite of the production in London last year, which was all flash and glam and apparently utterly without plot. This one was bizarre and absolutely crystal clear and well motivated. I got every tiny nuance.

The costumes were an assortment. Orfeo wore jeans and a black t-shirt, while Euridice was in a Greek-like dress. Pluto and Persephone wore outfits I would place in the Spanish Renaissance. La Musica wore a gauzy purple farthingale. Some of the men wore business suits, and other women wore outfits that made them look like members of the opera staff.

The dead Euridice was taped to the back wall of the set. The audience booed.

Michael Slattery as Orfeo carried the concept. Monteverdi includes a lot of types of ornaments which did not survive much past the early baroque, and Orfeo must perform these. He made an acceptable stab at them. His singing was emotionally intense and appropriately freaked out.

Throughout the opera is a bald media guy with a tape recorder and microphone. When Orfeo would sing he would point the microphone at him. Who is he? The guy who is there to film the wedding? He turns out to be Apollo/father, and he advises Orfeo to abandon love and go for immortality as a rock star.

At the house I was starting into my comment about how there are no bald guys at the opera and was told that the bald media guy isn't actually bald. It was a bald wig. Who would think of making a wig with a comb over?

The orchestration also contrasted with the London version, emphasizing theorboes, harpsichords and other string sounds with just a few winds. It worked much better for me.
Posted by Dr.B at 5:05 PM