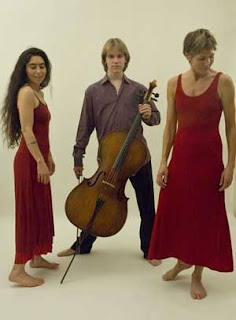 Word of mouth led me to The Bach Project Premiere at VSA North Fourth Art Center in Albuquerque on Friday night.

The project began with Two Women Dancing: Julie Brette Adams and Kate Eberle. They are both the dancers and the choreographers. Julie had choreographed some dances for movements from the Bach cello suites when they met Timothée Marcel, a 21 year old Frenchman, perhaps at or around this event in Santa Fe.

When the audience is allowed into the performance space, the performers are already there warming up. I suspect that this is part of the performance. The stage contains two dancers, a cellist, two cellos and three chairs.

He begins alone while the women watch, playing the prelude to Suite #1 pizzicato. No no, I keep thinking, that isn't how it goes. I was pleased to see that he played it normally at the end. At first they dance around the chairs, then they cast the chairs to the side. I in my total ignorance would call this modern dance. The dances were suitably abstract.

He is a very musical cellist who has Bach well under his skin. One number he half played and half sang in a manner reminiscent of scat. In the conversation at the end of the performance he said that when he begins to learn them, he first sings them. They all expressed an interest in knowing if Bach would approve. I don't see why he wouldn't. The playing was very beautiful, and the dancing was expressive and not at all trivial.