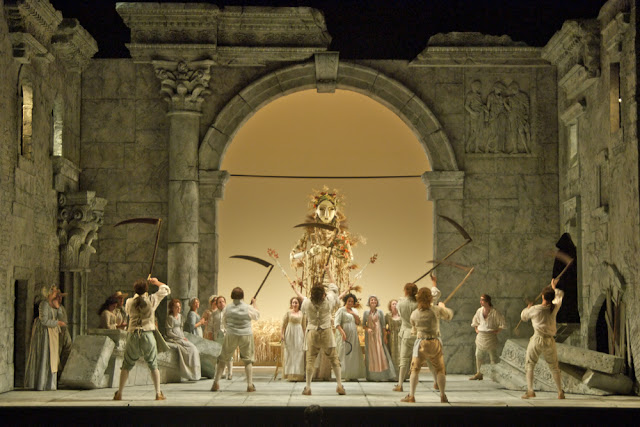 This is what the staging would have looked like if we'd seen it.

Between Monteverdi in the afternoon and Gluck in the evening on Saturday was a huge storm with wind, hail and lightning that blew down quite a few trees, including one that knocked down power lines near the opera house. Gluck's Orphée et Eurydice was performed with emergency lighting which illuminated the audience space, the stage with a bright light shining from the footlight area, the music stands and very little else. We skipped the intermission in order to increase the chances that the emergency lighting would last through the whole opera. It did.

I worried when they called it Gluck / Berlioz, unnecessarily as it turned out. Berlioz' arrangement is very respectful and retains the simplicity and transparency of the original, at least most of the time. Berlioz rewrites Gluck's orchestration to suit mid nineteenth century orchestral practice.

Orfeo was sung by Michael Maniaci who is billed as a male soprano. His coloratura and high notes were spectacular.

The chorus and soloists appeared in costume and sat in wooden folding chairs. The soloists acted out their parts to the extent that this was possible. Behind them loomed the architectural set. It was beautiful and very subdued.

Car headlights led us back to the parking lot.

Everyone should look out for Michael Maniaci, whom I heard do Poppea in Chicago. He is not a countertenor. He is singing in full voice, something like a castrato must have sounded, because his voice simply did not break as he grew up. It is an astonishing sound - not falsetto at all.

When you get a chance, please check out Holde Kunst, a classical blog by John Gibbons.