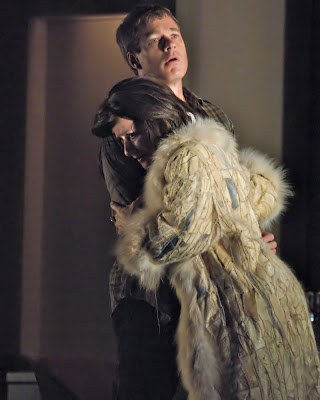 I have saved Orphée by Philip Glass for last because it is the most complex to describe and came last. The most important thing to know about this opera is that the libretto is taken directly from the movie by Jean Cocteau and was performed in the original French. I think it makes a wonderful opera. It was advised that one see the movie before seeing the opera, but I have not.

I went to the lecture before the opera. Philip Glass is a classical modernist who has entered into the popular culture. He is joked about on shows like The Simpsons and Saturday Night Live. He is the only composer that one naturally feels one could do that, too. I could write noodle noodle noodle phrases at least that well, couldn't I?

The lecturer played an annoying section from Einstein on the Beach. Then he stopped the recording and said, "Wait, it gets better," and played some more. "No it doesn't. I just said that."

Einstein and Satyagraha are much more repetitious and annoying than Orphée, a piece that plays like common theater. I found it theatrically effective, relatively singable, and even beautiful at times. It is still unquestionably Glass but occasionally rises to expressive lyricism.

The set is a pair of rooms in a simple art deco style. There is a large mirror on the left. Or is it? In the first act the actors pretend that it is a mirror by acting in mirror against it, though it isn't comical like Lucille Ball. [Do you remember Lucille Ball doing this with Harpo Marx?] In the second act it is actually a mirror. Or is it?

The plot involves the interaction of the poet Orphée, played by Philip Cutlip, and the death figure called La Princesse, sung by Lisa Saffer. Euridice, sung by Caroline Worra, and Heurtebise, sung by Jeffrey Lentz, are the co-stars. La Princesse has been sent to retrieve a young poet named Cegeste and arranges for him to be killed in a hit and run accident.

She becomes interested in the older, more famous Orphée and stays on earth to be with him. He becomes obsessed with listening to enigmatic voices being transmitted on the radio, words which are being created by the dead Cegeste. La Princesse wants Orphée for herself and arranges for his wife Euridice to be killed in another hit and run accident.

Each time the dead are carried off by two men wearing motorcycle suits and helmets that hide their faces. The dead person and the escorting Heurtebise become duplicated and walk around the rooms in mirror, an effect that is enhanced by the imaginary mirror.

La Princesse and the others appear before a heavenly tribunal because she has killed without instructions. Euridice is sent back, but Orphée must never look at her again while continuing to live with her, an absurd impossible condition that does not work. She dies and returns to hell, leaving Orphée to La Princesse.

There follows an extraordinarily beautiful scene where she explains where the instructions come from--the wind--and they pledge their love. The most beautiful singing of the week came here. He promises to do whatever she says, and she sends him back into the past with Euridice.

I found the effect profound and the expressiveness of the simple music surprising. The small audience cheered loudly.
Posted by Dr.B at 2:45 PM

I want to thank the Glimmerglass Opera for the pictures.

what a Picture!
really nice post, i love to watch Opera dance...