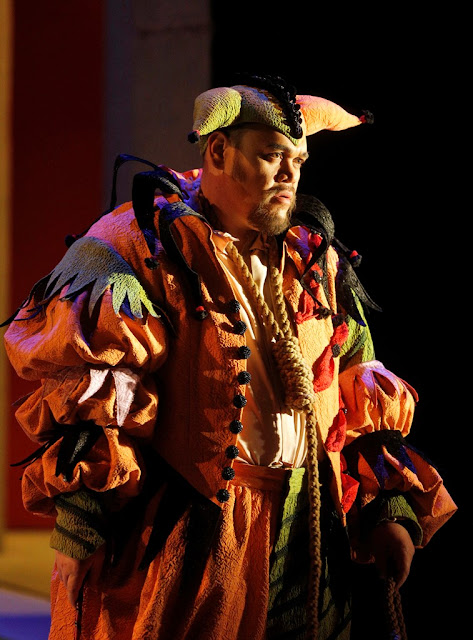 I included the entire cast from Verdi's Rigoletto so you could see how many of the cast members were Adler fellows.  In addition Zanda Švēde was Adler 2016, Quinn Kelsey is Merola 2002.  This is just bragging.  Two Georgias are represented, one in eastern Europe, the other in southern US.  And Quinn is native Hawaiian.  This is the present day world of international opera.

I enjoyed this very much.  The production seemed prettier, livelier.  Pene Pati started off a bit slow, but improved as he went along.  His high notes have a spectacular ring.  Nino Machaidze seems to have skipped hers, but was otherwise OK.

One is always searching for the wonderful, glorious portrayal of Rigoletto himself, and we found it today in Quinn Kelsey.  The second act aria was especially beautiful and received a suitable ovation.  This is the role that makes this opera, and Quinn covered the emotional gamut of this complex character.

I keep thinking how much we will miss the maestro.
Posted by Dr.B at 6:14 PM

Small footnote: At the same time our girl Nadine Sierra was singing this opera in Paris. We were lucky to get her for Lucia.

I like Kelsey's voice better But Nadine is very wowwie.

Maybe no one takes the high note in Caro nome any more.