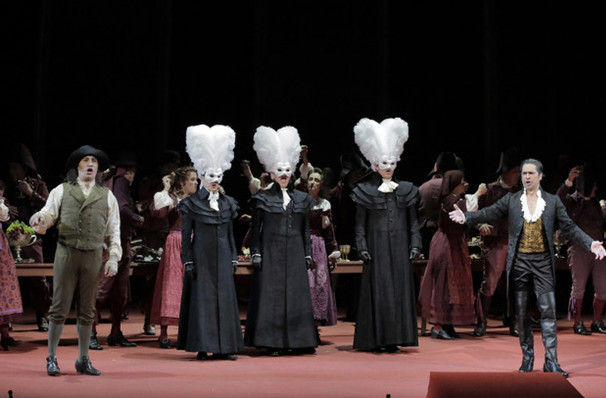 At the San Francisco Opera we have gone suddenly from a performance with 5 Adler Fellows to one with 5 debuts (*) and no Adler Fellows.  The debuts include the great conductor Marc Minkowski, Erwin Schrott and Ildebrando D'Arcangelo.  You can see this is something of a big event.

The production and Minkowski's conducting went well together.  Both moved briskly and smoothly from scene to scene with no hesitation.  With these wonderful singers our conductor brought us a masterful performance.  The only problem with the production from our viewpoint in the balcony was that it was filled with shiny screens that reflected the lights from the pit rather than the projected images.  Perhaps something could be done to reduce their shininess.

Schrott and D'Arcangelo are a magnificent pair.  Never was Giovanni such an arrogant asshole, and never was Leporello such a genius of comic timing.  We laughed.

The ladies were also beautiful though very serious.  Erin Wall whom I know from performances at Santa Fe was an elegant Donna Anna.  Ana Maria Martinez who recently sang here in Don Carlo was magnificent and intense as Donna Elvira.  Sarah Shafer made a youthful Zerlina.

It seemed to me that this Don Giovanni was longer than usual, that I was hearing things I didn't usually hear.  The talk seemed longer and more detailed.  So I called the opera, and yes, there were a number of restored recitatives that are usually cut.  Perhaps Minkowski wanted this.  I like that I noticed this.

Any thoughts abolutnie Stanislas de Barbeyrac , who is making his Met’s debut this season, also as Ottavio ?