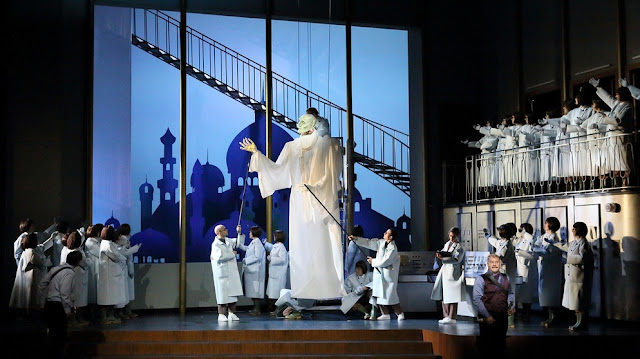 Oberon, or The Elf King's Oath (1826) by Carl Maria von Weber is originally in English with spoken dialog. Characters appear from A Midsummer Night's Dream.  Today it live streamed from the Bayerische Staatsoper where it presents in German with English subtitles.

The original dialog is rewritten to suit the regietheater production.  We saw this rewriting of the dialog recently in the Carmen from Aix-en-Provence, and it is strangely curious that it appears to be for the same reason--to make the opera about psychiatry.

I'm getting the impression a lot of people are angry about psychiatrists.  They pick two seemingly random people from the audience and conduct experiments on them to see if they will experience passionate, long-lasting love.  As things go along we pick up on the idea that this is personal between the head psychiatrists and that one or both of them are betting on no. Here no papers are signed and the fantasy is assisted with drugs and electric treatments.

The producer Nikolaus Habjan is a puppeteer.  His puppets are larger than ventriloquist dummies but are handled similarly except the ventriloquist tries to be invisible.  I've seen this sort of thing before but I don't think in an opera.  The characters that exist entirely in the fantasy of Oberon assisting an imagined mortal in finding his love and recovering his good name.  The real people are the two men from the audience and Rezia.  We aren't sure if Fatime is real or imaginary.  The psychiatrists and lab technicians are all real, of course.  I don't know if it's necessary to explain this any further.  The action results from sick cruelties inflicted on the test subjects.

Weber was a great composer, but this opera is supposed to have killed him.  It was a pleasure to hear this music, though technical difficulties interfered with some of the arias.  The greatest aria from this opera is "Ozean du Ungeheuer."  If you've never heard it, here is a sample.

Our soprano Annette Dasch was excellent, and at least one audience member shouted bis at the end of the aria.  We also liked the tenor Brenden Gunnell.

One of the tenets of Scientology is its hatred of psychiatry. Perhaps these directors are closeted Scientologists?