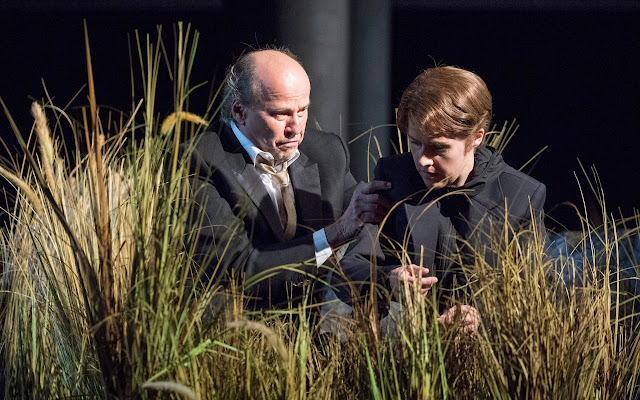 Claus Guth is one of the masters of Regietheater.  Looking at the above picture from his production of Mozart's La Clemenza di Tito we are reminded of a production of Lohengrin from La Scala a few years ago where the action takes place on a river bank with similar looking grass.  Yes.  That too was Claus Guth.  More recent experiences are the PTSD Fidelio and Salome in a men's wear store. So an opera about an emperor of Rome takes place in a grassy field.  I may see some water behind.  It seems to be a cabin in the woods.  The original tenor quit over "artistic differences." 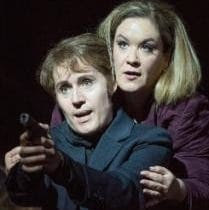 I like all these singers.  Alice Coote is outstanding, in spite of the fact that she lights cigarettes all the time.  They're talking about places in Rome, burning down the Campidoglio, but we see only grass.  They explain in the interval that this is to remove all hints of cultural context.  A swamp could be anywhere any time.

This particular swamp is where these same people played together as children.  Films play in the background showing children playing.  This production focuses entirely on the emotional relationships between the characters.

I hadn't until recently realized that this is such a wonderful opera.  Beautiful arias, beautiful sentiments.  And best of all it's Mozart.  In such an opera it is possible to sing with complete sincerity.  The soul is open.  My own experience of this opera is informed by Cecilia Bartoli's performances on her early Mozart recording of the arias:  "Non più di fiori," "Deh per questo istante solo" and "Parto, ma tu ben mio."

No flowers for me.  Non piu di fiori.  She repents and thinks she will not marry.  It is opera seria so they all live happily ever after.  Glorious.  Sesto is the star.  Anna Stéphany was a replacement for a pregnant Kate Lindsey.  She looked and sang beautifully and received the most applause.