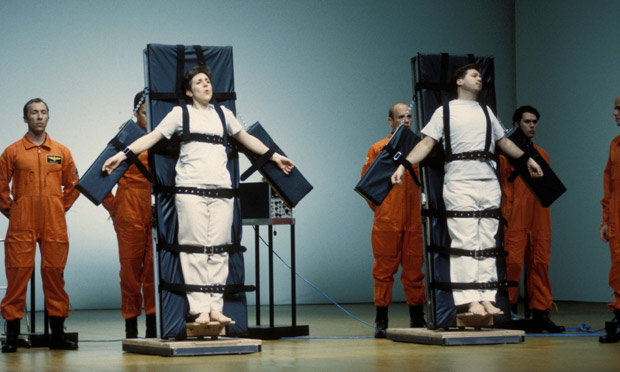 Someone said that Peter Sellars' production of Handel's Theodora was even better than his La Clemenza di Tito, so I thought I would give it a try.  He seems best in things that have religious themes.  This is one of Handel's oratorios and is in English.  This film is from 1996.

Hmmm.  There are soldiers and they wear American flags on their sleeves.  It's politics and religion rolled into one.  Christians are ordered to bow to idols to show loyalty to Caesar.  This is a  joy.  And then there is Lorraine Hunt.  It would be hard to ask for more.  He stages the first Christian scene like a prayer meeting, except women speak.  Lorraine sings of prosperity and people put money on the floor.  Many are in white and kneel on the floor to pray.  The chorus always present in any Handel oratorio represents the congregation.


Soldiers enter and warn the Christians that they are tempting fate.  "Dread the fruits of Christian folly."  This is not the usual oratorio libretto.   I understand it was not popular at its premier.  Oratorios usually draw their plots from either scripture or mythology.  Theodora is an historical Christian martyr.

I begin to grasp Peter Sellars' world view.  He sometimes strays too far from it.  He is THE outstanding American leader in the world of Regietheater, and this is one of his greatest works.  Among his productions, this one makes no alterations to the original text.

Apparently, honoring the Emperor consists of getting falling down drunk. So far I don't find this staging to be at all a distortion of the original.  People just look like people today instead of ancient Romans.  If this bothers you, you should get over it.

Christians are serious people while pagans are drunks seems to be the general idea.  One remembers this primarily for the work of Lorraine Hunt, but I am enjoying also Dawn Upshaw and David Daniels.  Theodora is in prison and Didymus visits her.  She asks him to kill her, but instead they exchange clothing and she escapes.

This is an extraordinary piece, deeply emotional.  One needs exposure to a wider range of Handel's works.  Here we still hear the Italian coloratura along side the more English lyricism and Handel's great choral music.

The picture above depicts the application of the death penalty.  The ending is sad and strange.  Christians wave their arms rather more than is strictly tolerable.   My experience of the Baroque does not include anything like this.  I came for Peter Sellars and Lorraine Hunt but ended with the joy of some of the most beautiful music of Handel I have ever heard.
#ad

I saw this live, twice, and Lorraine was extraordinary. Such intensity of feeling filled the theatre, and was deeply moving. A great memory