The Chastity Tree at West Edge 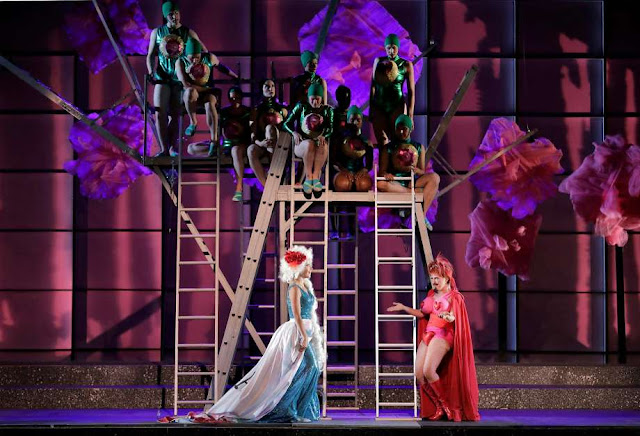 The Chastity Tree, originally called L'Arbore di Diana (1787) by Vicente Martín y Soler, is contemporary with Mozart's Don Giovanni and has the same librettist, Lorenzo da Ponte.  It was performed with the original Italian da Ponte libretto.  It is important to notice that L'Arbore premiered in Vienna, while Don Giovanni was first presented in Prague.  Martin was Mozart's competition.  This opera faded from awareness during the 19th century, until it was suddenly revived in the 21st century.  I will never again think of Mozart as a slut.

My seat for this performance was an improvement over Saturday night.  I could see fine. The metal object shown above is intended to represent the tree.  Diana, goddess of the hunt, and her three nymphs make up a community sworn to chastity.  Diana has used her magic to create a tree that sings when the chaste nymphs walk beneath it.  However, if one of them is found not to be chaste, the tree pummels them with apples until they die.  At the start of the opera a group of women dressed in green with a large red circle climb up into the tree where they remained for most of the rest of the opera.  I decided that these were the apples.  They occasionally sing, do simple gymnastics and perform choreography.  In the overture the tree lights up and the pom poms wave when pleasant music plays, representing the tree when it is happy.

In her status as goddess of the hunt, Diana in mythology carries a bow and arrows.  Her arch rival and perhaps enemy Cupid is similarly equipped but uses his arrows to strike love into the hearts of humans.  This places them at complete cross-purposes.  As you might expect from a libretto by da Ponte, love or at least promiscuity wins in the end.  Cupid brings shepherds into the community of nymphs, making this a traditional nymphs and shepherds plot.  Only the unfortunate Silvio seems to miss out on the love making. 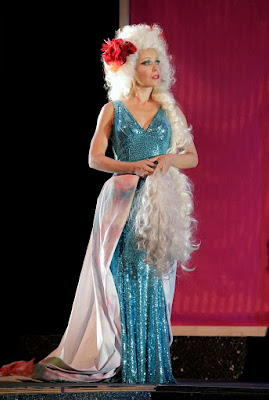 Hanky panky is everywhere, but Diana herself falls seriously for the shepherd Endimione, a beautiful young man.  The best music is for Diana.  Cupid is a boy, sung by a woman, but disguised as a woman throughout the opera, except he/she keeps the goatee and mustache.  Various characters suggest that Cupid might be a man, but he/she  remains in her pink dress until the end.  At the end a storm destroys the tree before it can throw down any apples.  Boy Cupid declares victory.

This is an entertaining opera which will henceforth inform my sense of the da Ponte comedies by Mozart.  The music is good but not great.  It's fun.  Enjoy.

if you're in the general admission seating, does getting to the venue earlier get you a better seat? any tips on getting a better seat?

Yes. The general admission seating is first come first served and there are some reserved seats in that section. I found that sitting toward the sides gave better sight lines than sitting in the middle.