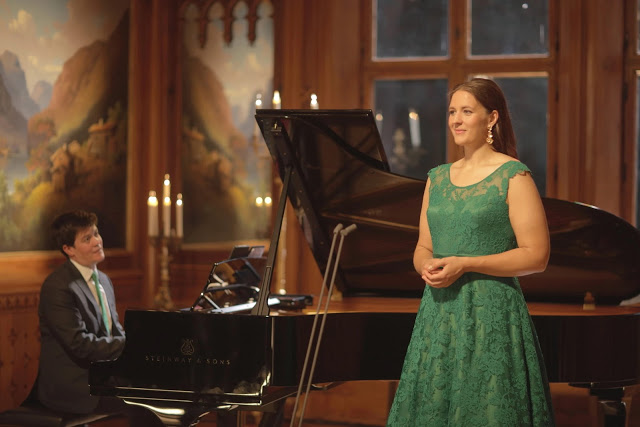 March 19, 2021?  This picture is of the people performing, Lise Davidsen and James Baillieu, but the venue shown is wrong.  This recital is in London on a different date.  I am discussing the Lieder recital streamed from London to Washington, DC.

I feel a certain musical kinship to Lise, not for her glorious Wagner and Strauss operatic triumphs, but more for her Bach, Brahms, Schumann and Strauss Lieder.  When I started at IU, I told the professors that I had performed the alto solos for all the major works of Bach.  They responded, "No you haven't."  So I said,  "Matthew Passion, B minor mass, Magnificat, St John Passion, Christmas Oratorio.  What does that leave?"  I love it that Lise has sung some of the same music.   I once did a whole recital of Lieder by Brahms so it is nice to see a couple of them here.

Allerseelen
Die Georgine  "ob spät, ob früh, es ist deselbe"  [Early or late it is the same.]  She has come to me late in my life,  It is a wonderful gift.
"Wiegenlied"      Richard Strauss  I have grown to love this in Lise's version.
"Malven"      Richard Strauss
"Befreit"      Richard Strauss
"Caecilie"      Richard Strauss     This makes a great ending.
This is an entirely different style of singing than the Wagner and Strauss operas she is rapidly becoming famous for.  It is true Lieder singing.  I'm pretty sure the only two languages are German and Finnish.  The film includes the original text with an English translation below it.
Between each group she talks to us, generally about the songs and about how much she is missing the audience.  She would like to say hello to each of us.  I can only hope that this will happen.  I wish her a wonderful career and a life of happiness.  I've never been famous, but I've had fun.

If you want a disinterested review of Lise Davidsen, you will have to look elsewhere.  I find that I love it because she does.  In the not too distant future there should be a Grieg song album.
Posted by Dr.B at 7:30 PM

This one is staying with me. I love her Lieder singing too.