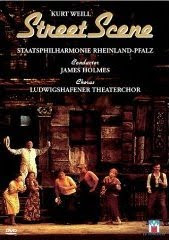 Street Scene, an American opera on a play by Elmer Rice, music by Kurt Weill, lyrics by Langston Hughes, produced by the Houston Grand Opera and theaters in Berlin and Ludwigshafen, 1995.

Mahagonny is about capitalism, how it starts, how it grows, how it corrupts, how it ossifies into exploitation, how it dies. Street Scene is about love. Is it any wonder it is considered Weill’s masterpiece?

I suppose the street that makes up the set might look different ways, but the one on this DVD from Netflix looks exactly like a tenement in New York City in the 1930’s, exactly the way it should look. The entire story takes place during a heat wave.

During the opera a baby is born, people are hot and sing about ice cream, they fall in love, they have affairs, they get drunk, they fight and they die, just like people everywhere.

The singing is big voiced and operatic, but the show is easier to make work than Mahagonny where the philosophy overwhelms the characters. In Street Scene there are no hit tunes, but there is love.

I believed it. I'm not sure I have seen the perfect Weill yet.
#ad