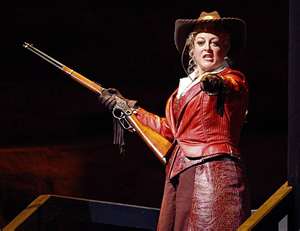 I sat with an old friend at the HD simulcast of the centennial production of La Fanciulla del West from the Met, and she would nudge me and say "Phantom of the Opera" every once in a while.  This similarity developed into a lawsuit that was settled out of court.  Thankfully, I am relatively unfamiliar with Phantom.

I like opera at the cinema.  It's nice to see their faces.  It was especially nice to see Deborah Voigt's face throughout the performance.  There was a lot to see.  I liked her a lot more this time.

This is the same production broadcast on television with Placido Domingo years ago.  I was disappointed to see that Marcello Giordani had shaved off his mustache that he had during the intermission of Don Carlo. It is also the same production used in Ulm when Giancarlo Del Monaco was Intendant there in the seventies.

My friend was attracted to Lucio Gallo, the Italian baritone who sang Jack Rance.  He's very sexy.  In general the singers seemed more suited to their roles than they had in San Francisco.

There were a lot of horses seen through the door in act 1, but Deborah Voigt didn't ride any of them.  Sondra Radvanovsky hosted.

The performance passed the essential Puccini test:  I cried.
#ad