This information comes from Brittanica.

"Giovanni Bardi, conte di Vernio, (b. Feb. 5, 1534, Florence—d. 1612, Florence), musician, writer, and scientist, influential in the evolution of opera. About 1573 he founded the Florentine Camerata, a group that sought to revive ancient Greek music and drama. Among the members were the theorist Vincenzo Galilei (father of Galileo) and the composer Giulio Caccini. Bardi collaborated with these and other Florentine musicians in court entertainments from 1579 to 1608. [Other members were the poet Ottavio Rinuccini (1562-1621), the musician Emilio de' Cavalieri (c.1550-1602), and the composer Jacopo Peri (1561-1633).]

"Bardi and his circle were influenced by the theorist Girolamo Mei, who had translated all known works of ancient Greek music theory."

What I cannot find in any book is that if you are walking along a street in Florence and happen to notice it, there will be this sign. 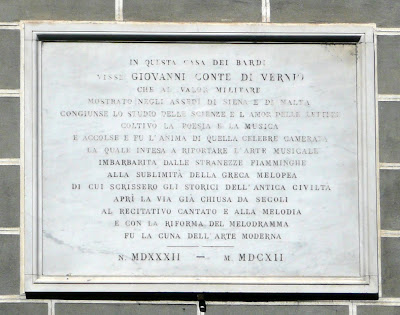 It stands on the side of this unassuming building where met the famous Camerata. 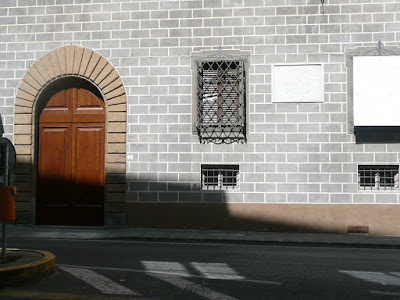 Now everything is a camerata, but in that day the word was newly minted to refer to Bardi's group.  The Camerata read everything available at the time and speculated on the actual experience of Greek drama.  They concluded that in a proper play in ancient Greece everything was sung.  They also concluded that there was no place for counterpoint in such a drama, and composed their own pieces with simple chordal accompaniment.

Searching yields this example with text by Bardi and music probably by Cavalieri.

This piece by Caccini is also very nice.


None of them resemble recitative. I'll look further.
Posted by Dr.B at 12:20 AM