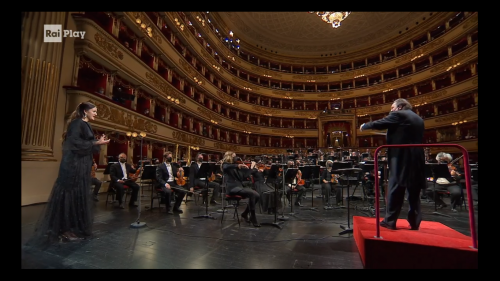 Lise Davidsen successfully made her La Scala debut last night in a concert with her as the featured soloist.  These days Lise starts everything at the top.  The above film shows the orchestra on the floor with the audience in the boxes above. Riccardo Chailly conducted.  I remember him primarily as the conductor of Cecilia Bartoli's La Cenerentola recording.

Only "When I am laid in earth" was something I had not heard Lise sing before.  It was good but unspectacular compared to the other things.  She wore black in the first half and looked radiant.  These songs are basically all tragic, so black was ok.  For the second half she wore a beautiful pastel outfit which brightened the mood.  Her hair is enhanced with an extension down to her waist.

The two pieces in German are Lise's signature pieces, both of which I love dearly in her voice.  The most spectacularly sung of all was the Verdi "Pace, pace mio Dio".  It would not do for her to omit the Italian language.  All of her languages were beautiful.

I was intrigued by the interplay between Chailly and Davidsen.  He seemed to be looking to her for expressive cues.  This is something singers long for.  I felt it allowed Lise to feel secure and give her utmost.  As a result she made the greatest impression in the great Italian aria "Pace, pace mio Dio."  They were a magical pair.  This is La Scala after all.

I found this to be one of the most intense and spectacular vocal concerts I've ever seen.  The audience stood up a lot.  It's out there.