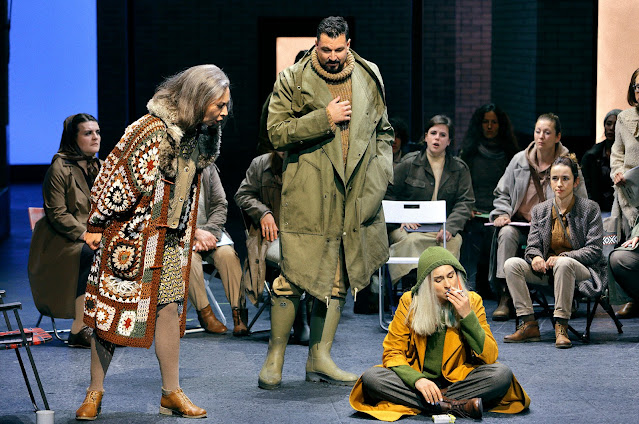 Richard Wagner's Der fliegende Holländer streamed from Bayreuth this summer on July 25.  It's regie, of course.  That means that the staging is modernized.  During the overture a mother hangs herself.  It's rather wildly realistic looking.  This doesn't seem to be the traditional plot about a sailor.  I'm here for Asmik Geigorian.

The sailors sit around drinking in a bar and never go to sea.  The girls don't spin, but instead practice the spinning chorus.  Senta smokes.  Erik comes in and chases the other girls away.  He warns Senta that her father wants to find her a husband.  Erik and Senta are exes and fight like it.

Asmik is 40 but here passes for younger.  She is good looking, her voice is strong and her acting good.  The sound of her voice does not particularly appeal to me.  For me it is the feeling in the music.

Daland brings the Dutchman home and introduces him to his daughter as her bridegroom.  She swears to be faithful until death.  This takes place around the dining room table.  She gets excited over him for no apparent reason.  The ho hum everydayness of the staging takes all the fizz out of it.  Asmik tries to make up for it, but it's too much to ask.

In Act III everyone is outside eating and drinking except the sailors who sit glumly.  The townspeople ridicule them until the Dutchman takes out his gun and shoots a few.  Ugh.  Everyone but Senta runs off.  Erik complains to Senta who sits staring.  They sing about eternity on the sea, but there is no sea.  The Dutchman throws Senta on the floor.  Mom comes in and shoots him.  Senta laughs and tries to comfort her.  That's it.  I'll probably never watch this again.  The chorus is excellent.