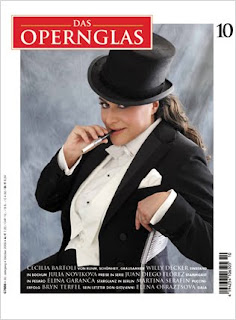 This interview is translated from Opernglas.

Cecilia Bartoli is full of the passion for action. This time it is about music for castrati. About her unusual new project she spoke with our coworker Dr. Thomas Baltensweiler. Selections from the interview.

Your new CD is dedicated to music which was written for castrato. How did you come to this idea?

The title reads “Sacrificium” and goes on to say: Particularly in the 17th and 18th century Italian boys, who originated usually from poor families, were castrated by approximately eight years of age- in the hope they would have a singing career. They had to leave the family, train the voice, learn an instrument. Annually for music’s sake around 4000 boys were castrated, making 400,000 in 100 years. That is a tremendous sacrifice that was made for art, above all if one considers that perhaps only two or three of 4000 made a career.

With your CD you continue to a certain extent what you began with the album “Opera proibita.”

Yes, exactly. At the beginning of the18th century the Vatican had forbidden opera performances. In addition it was not permitted for women to appear as singers. “Opera proibita” contains music which was sung by castrati. These were the only ones who were allowed to sing the appropriate parts. And now imagine: The Vatican forbade the castration, although it permitted only castrati in the high voice parts. Later It became customary to use castrati. Women were not able to master a tessitura which extends so far up and down. Besides the castrati offered the possibility to clever managers of making a lot of money. They were at the mercy their occupation, which was like a prison, had no private life, and therefore the career was the only goal in their life.

Most opera singers bring albums out with popular arias. You submit one CD after the other with rare pieces, and all become a sales success. How can you explain to this?

Success is not to be predicted. I think it is crucial to really believe in the music one sings, in its message. And one must have a theme. Simply to produce an album with the most famous Händel arias does not do it. I believe, the public wants something to learn – about a composer, about a certain time, why a piece was composed and for whom. The public is curious. My CDs are more projects than only Recitals. Each needs time for investigation, and not many singers or at all musicians have this time. Not the time, not the patience and not the passion.

When I heard your Rossini concert recently in Zurich, I was fascinated that you sing with the same flexibility as at the beginning of your career. How do you retain your vocal Fitness?

It is crucial to select the correct repertoire. I try to respect my instrument and its boundaries. Perhaps one can best make this clear with a comparison. I am a big fan of Roger Federer. [Dr.B. Me,too.] He is a tennis player who has his body under perfect control; he would never force something. And I try this, too. If one is young, perhaps one can make steps, which are longer than one’s own legs. But that does not function on a long-term basis.

Your next new opera role is Norma. Can you tell us something about your entrance?

Norma is still part of my Malibran project. There is no Malibran version, but Malibran sang Norma. Bellini wrote a special Malibran version only for “I Puritani.” The first Norma was Giuditta Pasta, who sang also Mezzo roles; after Pasta, Malibran was the greatest Norma. With the conductor Thomas Hengelbrock, with whom I have already co-operated on “Sonnambula” in Baden-Baden, I would like to present “Norma” in such a way, as Bellini composed her. Not as in the 1950s and 1960s, as Maria Callas, Joan Sutherland and - somewhat later - Montserrat Caballé embodied the role. The same tenor, who sang in “Norma” in Bellini’s time, appeared also in Halévys “Clari.” It must sound light and lyrical and surely not as Mario del to Monaco. He was great, but stood in the tradition of the Verismo. Bellini however is the son of Mozart, not the son of Puccini. I want to try to return Norma to the Mezzo color, to the lyric coinage and to the dark pathos. Norma, though probably a young woman, is of a dark character. Again, as with the “Sonnambula,” historical instruments are to be used. Also with the dynamic markings I want to follow Bellini. “Casta Diva” is a prayer with a triple piano [ppp]. That is what Bellini wanted, and what I would like to realize, even if it contradicts the Verismo tradition of “Norma” performances.

[Dr.B. This is a blog and not a magazine, so I am permitted to put in comments about Roger Federer. I also get to say that I love her. The interview in the printed magazine is undoubtedly longer. I wish I had the whole thing. I loved her Sonnambula but cannot imagine Norma.

The other 3997 castrati, or at least most of them, I presume would have taken up positions in church choirs where they would have sung the alto and soprano parts.]
Posted by Dr.B at 11:49 AM

The picture makes me laugh.