I went last night to the 10th Annual San Francisco Electronic Music Festival. This is sort of an antidote to Cats. People walk out on Cats, it seems. Maybe what's needed is an electronic Cats. They would sound more like cats that way.

I digress. The festival lasts for four days. I'll see how I do.

There are three or four performers per evening with each performer having his/her own set of gear. The show starts with all the gear on stage, so that makes for a pretty crowded stage. Apple is the computer of choice. 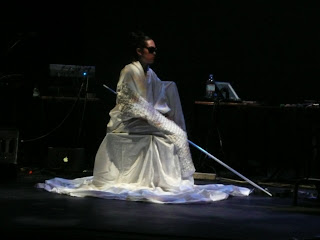 Last night it also started with Mariko Masaoka-Drew on the stage while the audience filed in. She is Miya Masaoka's daughter and performs the LED kimono piece, the first item on the program. Miya and her Koto and her computer play the music while Mariko wears the kimono and stands in various positions. The komono has a bunch of white LED lights on it which respond to electronic stimuli. The low and growly sounds did not particularly appeal to me, but it was fun to watch.

My favorite of the evening was Lukas Ligeti who plays something called a marimba lumina. This is like an electronic keyboard, except it's flatter, has things on it that light up and is designed to be struck like a marimba. It is sensitive to how hard it is struck, like a marimba. 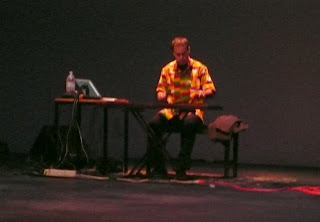 The sound palate produced in performance comes from the computer that is attached. Different sounds map to different keys, much like a synthesizer drum track, except as each piece progresses they seem to change. I especially liked the piece where the sounds were like someone hitting tin cans.

He performs the pieces himself with a set of four padded drum sticks. I am trying to explain what I saw and heard. Perhaps you would prefer the program notes: "...a motion-based, polyrhythmic drumming technique, a choreography for drums, allowing performance of extremely long cyclic patterns." It goes on.

Anyway, as I was saying. Sometimes the sounds that are mapped to a key are a group of a few notes which then repeat until he stops them. Or perhaps they just loop a certain number of times and stop on their own. The result is extremely complex rhythmic patterns, dynamic, driving, exciting, loud, basically quite fun. I vote yes.

He was followed by "the fabulous amy x neuberg," a very amusing performer who used a device called the analog Blippoo Box, a synthesizer that features "chaotic modulations," or so the program notes proclaim. I advise ignoring the program notes. The device involves hand motions like a Theramin, or so it said. I have heard a Theramin and it sounds nothing like this. It makes high whiny sounds and this was yet another low and growly. I prefer high and whiny to low and growly.

She sings with her performance and was projected on a screen behind using a web cam. The piece is called the dude trilogy, and the word "dude" appears at intervals. Her diction isn't that great, so I'm not sure what it was about. She is funny and takes a close-up bite out of her Blippoo Box to end the piece.

She is more in the Lori Anderson school. After dude, she performed a few cabaret songs for voice, percussion pads and live looping. I'm not sure how extemporized this was. Electronic operas were mentioned. I would like to see these.

If you are looking for something completely different, you might try this. It plays for three more nights in the Brava Theater on 24th street.
Posted by Dr.B at 6:45 PM