I went the second night of the San Francisco Electronic Music Festival, but didn't hold out for the whole thing.

The situation was the same as the night before. There were four performers, so there were four groups of instruments and computers set up. Everybody uses Apple computers. This is a note to me. I have always used microsoft and the products are not that hot. Maybe I should switch.

Again the order of performance was changed. Donald Swearingen was first. His setup is called "an expanded, computer assisted performance environment." It was a group of odd looking coils that surrounded his computer. He waved his hands in the air above them and sounds came out. He is interested in something called "interrupted narrative," which means that sometimes when he waved his hands, words came out. They sounded like words from the radio. The piece was called salvation station and included various evangelists saying the word "Jesus" in an oratorical style. I don't think I was saved.

The second performer, Mark Trayle, had four saws in his setup which seemed to vibrate in an industrial sort of way. It was like being locked inside an electric saw. I longed for the saw lady who makes her saw sound sweet. 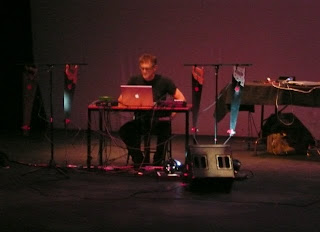 I should have stayed, but I was very tired after walking around most of the day.
Posted by Dr.B at 12:39 PM