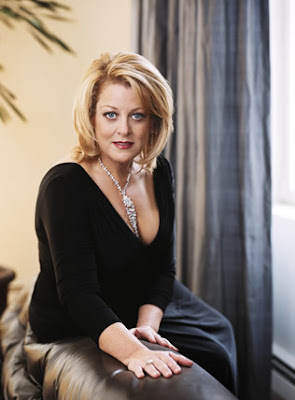 Deborah Voigt has expanded her repertoire to highly dramatic parts. She spoke with Dr. Thomas Baltensweiler in Zurich about the planning of her debuts and ways to get through the roles. Excerpts from the interview.

You are faced with important role debuts. In June you sing your first "Fanciulla" in San Francisco. Minnie is a killer role. With what feelings do you approach the challenge?

I don’t see Minnie as a killer role - and I say this in a moment when I have just returned from working on the part with a coach of the Zurich Opera. Perhaps my impression is because I also sing Salome and Isolde. "Fanciulla" offers gorgeous music that contains a lot of lyricism. Of course there are terrifying high notes to attack from out of nowhere.

More difficult than singing is portraying the character: Minnie runs a saloon, can deal with weapons and give the miners Bible studies. One can only imagine: a shooting religion teacher! In addition, you will find in her, as far as the choice of a man is concerned, lots of strict ideas, lots of tenderness and the longing for the right man after waiting a long time for him.

You should have sung Brünnhilde in the recently completed "Ring" at the Vienna State Opera, but you then withdrew. Now a production is planned at the Met. What has changed in the meantime for you?

Brünnhilde had been planned in addition even in the old "Ring" at the Met and San Francisco. I felt that the role would have come too early, because there was something else I wanted to sing. I had lost a lot of weight and I wanted to play roles which had previously not necessarily been open to me. And she who sings Brünnhilde only gets offered the highly dramatic Fach. The world needs Brünnhildes; to find a Tosca is not that difficult.

But the world has not changed in recent years, it still throws itself on singers who embody Brünnhilde ...

But in recent years I have become more secure in it to fill my agenda with dramatic roles. Today I would no longer accept Aida, as it would turn my hair gray. A "Forza"-Leonora would still work, but I would probably offer no more.

After Brünnhilde you will have almost all highly dramatic specialist roles in your repertoire, you sing so well Isolde and Salome. Will life be boring, or are journeys of discovery into rarities planned?

Then there is Elektra, which is definitely planned for 2013/2014. The plan is also for Kundry, and I’m thinking about Ortrud. For roles outside of my core repertoire - Lisa in "Pique Dame" I find wonderful – there’s not enough time. "Die tote Stadt" would appeal to me on stage, but it can scarcely come after Brünnhilde. Also I would be interested if a composer would write a new opera for me. But the majority compose for the lyric soprano voice.

"Elektra," which you mentioned, plays an important role in your career ...

My ambition is one day to have embodied on stage all three major roles in "Elektra", including Clytemnestra. At the beginning of my career I sang the fifth girl, who was my first role in Europe. Chrysothemis was something like the breakthrough for me. I was contracted in Boston as Ariadne, and a critic of the New York Times wrote such an enthusiastic review that the Met, which sought a Chrysothemis, was attentive.

How do you face the trend to market singers ever more about their appearance?

We must accept that the appearance plays a big role, and I think that will not change that fast. How I looked at the beginning of my career would be a problem today. Soprano and tenor in the opera must make a credible pair. Many young singers with weight problems contact me because they think that I might encourage them because I have shared their problem. But I can only say to them: your weight is a problem. On the other hand good looks is relative, and one should not forget that in our profession it is primarily about opera and not the color of a singer eyes.

You sing Italian and German parts. Is there a preference for one of the two?

For the German. My voice sits far forward and is pervasive. In the Italian repertory I never had the same success as in German. If my name were Voigtini, perhaps it would be different. But Voigt - in German-speaking areas people pronounce my name "Vogt” - not quite right for a Tosca. Also in the German Fach there is a lot of lyricism, as in Wagner, since you do not need to shout. Although - sometimes yes.

[As usual, this is translated from the online version of Opernglas. To get the Germans to pronounce her name properly it would have to be spelled Weut.]
Posted by Dr.B at 6:49 PM