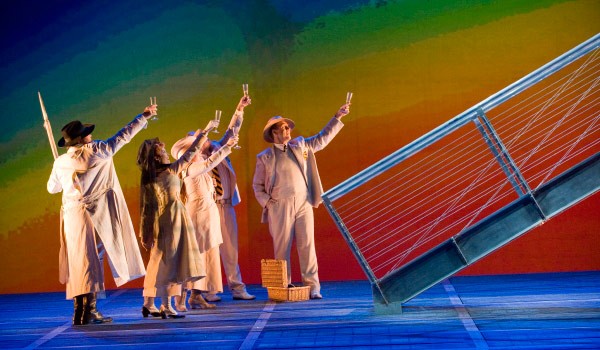 After seeing the dress rehearsal of Das Rheingold last night at the San Francisco Opera, I am starting to wonder if it is possible to do anything with this opera that doesn't seem silly. At least in this version the screaming Nibelungs sounded like eerie, frightened children instead of the laughable operatic screams at the Met.

Does it make sense that the gods are from the lost generation, people dressed for a cruise like characters from Now Voyager?

Mark Delavan as Wotan looks very dashing in his high riding boots and nautical blue jacket. Fricka (Elizabeth Bishop) is just a jealous wife who would like her immortal husband to stay home more. In this version Freia (Melissa Citro) falls for the giant Fasolt and is heartbroken to see him killed.

Rheingold is useless without a great Loge, and we have him in Stefan Margita. Ronnita Miller is a wonderful Erda.

Donald Runnicles conducts. I always like his Wagner and did again, but the orchestra doesn't achieve the big tone of the Met orchestra.

But how do we make gods and heroes real to us? Do we dress them up in armor like Lord of the Rings or the Met Ring? Here they are like people in a Cary Grant movie, vapid but well-dressed.  An Affair to Remember perhaps? At the end the gangplank comes down and they leave for their vacation. Perhaps they are boarding the Titanic.

I want to add that I like Mark Delavan's Wotan very much.  His voice is right for the part.  He needs only to go deeper into the music than he has so far.

Interesting reflections! Your comments, at least, make a fair case for the logic and interest in having the gods as suave but helpless upper-crust types; I'm sorry if the production didn't.

Tangentially, this makes the second Ring/Now, Voyager connection in my recent experience. A friend and I came to the conclusion that the way Kaufmann took the mead horn from Westbroek turned it into quite the "two cigarettes" moment.