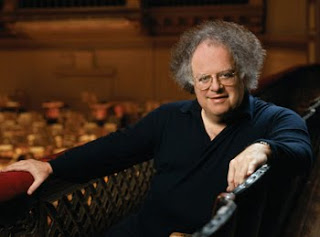 Long before the Metropolitan Opera broadcast operas in HD into movie theaters there was a TV show called Live from the Met. It was still called this even after it was on tape. Many broadcasts from this series make up the material available on the Met Player. Almost always the first name in the series of names, the one indicating the conductor, is Levine. To us out in the hinterlands it looked like he conducted everything. After all these years James Levine simply is the Metropolitan Opera.

As a comment to a blog post, I was passed a link to a film on PBS about James Levine at the Metropolitan. I see that it is no longer available. I wish I could watch it again. It switched annoyingly around in the subjects, I recall. For me the most interesting parts were the ones where he is shown coaching Placido Domingo.

Levine is a great musician and a great opera conductor, but he is in every aspect of his career and life very much an American. In America we are taught that the music is all on the page. We find the "composer's wishes" by studying the page of music. The music that forms our own heritage is often quite different from the music of classical repertoire.

The part of the music that is not on the page is the part that comes from national tradition. Now Riccardo Muti, a purely Italian conductor, may indeed take it upon himself to purify a score of tradition, as he did in this DVD of Il Trovatore, but his natural Italian soul will prevent him from leaving out the traditional Italian expression.

If Levine has flaws, they lie in the area of making everything from all the different operatic traditions all sound the same.

So we see in the film Placido telling us that when he is learning a new part, he always goes to Jimmy [Levine]. Jimmy's coaching made possible his great achievement in being possibly the greatest Otello of all time. And we see Jimmy helping him work Simon Boccanegra into his voice. And what is the main criticism of Placido Domingo? He makes everything sound the same. I wrote about the Placido Domingo problem here. "He sings a lot of Italian repertoire, but isn't exactly Italian. He has always sung a lot of French opera, but isn't exactly French. Now suddenly in his old age he is a Heldentenor without ever sounding exactly German," I said. Apparently James Levine and Placido Domingo are one. Very interesting.

For me it is always about the music, and I am trying to explore that here.

Levine thinks of himself as the guardian of the past. He is carrying forward to future generations this great art of the past, specifically the past of the Metropolitan Opera.

This includes the heavy romantic sound of the orchestra applied to every era and national style.

This includes the type of loud, heavy voices that are hired for every period and genre. I want to change my mind from what I wrote here: I don't think they're amplified (maybe, maybe not). The Metropolitan Opera both chooses and trains singers to a particular type of brittle penetrating sound. This is felt to be the proper way for an opera singer to sing. The emphasis is very much on sound over style.

One of the results of this is the usual high standard in Verdi performance. Possibly it might even be said that the Metropolitan Opera sets the standard for Verdi performance. It brings power where it is needed in Verdi. There will be articles about Verdi voice, but nothing about Verdi style. People are cast into any role that fits their voice, whether or not they know anything about the style for that genre. Sometimes it works, sometimes it doesn't.  The Verdi of Maria Callas and Leontyne Price is each particularly wonderful because it succeeds both as voice AND as style.

Each of these opera schools arose in particular places with particular musical cultures. It is only modern life that mixes them all together in the same institutions and blurs the distinctions until these distinctions virtually disappear.

Thus the Metropolitan Opera would make no effort to return Le comte Ory to the more authentic score.

I think this tendency to amalgamate everything into one music that takes place in large institutions like the Met is the true source of the interest in original instruments orchestras. Because they simply cannot achieve the same sound as the traditional opera or symphony orchestra, they look for the music itself in a new place. They don't just sound different; they phrase differently.

The Metropolitan Opera is about standards, and they seem generally pretty high to me. Thus the shock of out of tune horns in Rheingold. It is opera with a generic, particularly American view. Once more we are the melting pot.

I enjoy more the differences. I think once more of the completely astounding Werther at the Paris opera. I had to travel to Paris to know that this was even possible.

There is a certain inevitability to this amalgamation process, especially at the Metropolitan.  In San Francisco our musical directors have come from other places.  Kurt Herbert Adler conducted himself and was a German.  Donald Runnicles is from Great Britain.  Nicola Luisotti, the current musical director, is from Italy.  They bring their national biases with them.

My personal bias is for a more diverse musical scene.  I especially don't like it if all the singers sing the same.  Before HD I was not as exposed to the opera product of the Metropolitan Opera.  The bias toward heavy voices at the Met undoubtedly predates Levine.  Beverly Sills stayed across the plaza.  Elisabeth Schwarzkopf came to San Francisco in 8 different seasons before appearing in New York.  Levine completely identifies with the traditional biases of the Metropolitan and actively works to preserve them.

What would be ideal for me would be quality and diversity together.
Posted by Dr.B at 11:06 AM