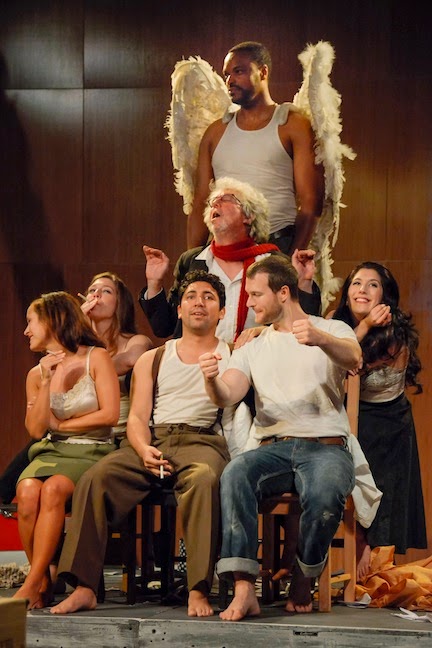 Where to begin?  This "opera," Hydrogen Jukebox, by Philip Glass on words by Allen Ginsberg was presented by West Edge Opera at the Ed Roberts Campus in Berkeley.  When I used to visit this part of Berkeley, this was a BART parking lot.  They have replaced about half of it with this building, a center for people with disabilities.  They can go directly from the Ashby BART station into the basement of the building.

The picture above shows the entire cast.  The Narrator, an actor who does not sing, is the guy in the center.  The stage for this production was on the south end of the large space and was quite tiny, with ladders going to the next floor.  At one point the invisible conductor climbed down one of these ladders and played the piano.

"For me there are two considerations in setting text to music. There are the words themselves, which need to be set in the most natural way. With Allen's poetry I was most intent on respecting the music that was already in the words. Then there is the musical environment into which the words are set. In the poem Aunt Rose, for example, I used a 5/8 rhythm — a kind of lopsided rhythm — 1-2, 1-2-3. I heard the rhythm from the description of her toot: it's a picture of someone who walks with a limp. That's the only specific relation of the music to the words."

The result of this approach for my ears was a piece where the words dominated the music.  It also made for a very repetitive rhythmic feeling because Ginsberg's poetry tends to use a stagnant rhythmic pattern.  (Ok.  Pile on.)  I know.  Glass is always repetitive--he calls it "repetitive structures"--, but this is the only time it has actually seemed monotonous to me.  Maybe he's simply too respectful of the honored poet.

The opera uses 20 poems or fragments of poems on virtually any subject.  In one Jaweh and Allah are warring, a concept I loved.  Another deals with Aunt Rose.  Another is about smoking grass--very timely, don't you think?  There were homosexual and heterosexual couples.  Uncle Sam makes an appearance.  A flag is held up but carefully refolded and placed in a box.  It reminds you that there were once liberals in America.  I was astounded by how timely it all was even though the opera was from 1990 and many of the poems from much earlier.  I expected to be more shocked by this.  The world has changed a lot.

There was no real plot or characters.  The words were so dense and complicated that ones eyes were preoccupied with reading them with little time left for watching the action.

It's wonderful how Glass will make an opera out of anything.  Appomattox is still the most boring.

The End of the Affair 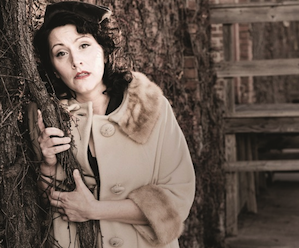 The End of the Affair by Jake Heggie (2007 version) was staged at the north end of the large space.  This work is far more of a conventional opera with characters and a story, and takes place near the end of WWII in London.  It is based on a story by Graham Greene.

The plot is about an event and how it affects everyone involved.  Maurice and Sarah are in bed making love when a bomb strikes.  Maurice gets up to warn people about the bomb when another bomb causes a building to fall on him.   It's a bit like the movie Little Dorrit where the same story is told from two different perspectives.

At the beginning we see the story from Maurice's perspective.  The bomb strikes, he gets up, and Sarah leaves him with no explanation.  He spends the next 18 months trying to understand this, and ultimately hires a detective.  At the end of act 1 we see the incident portrayed from Maurice's point of view, and we fade to black.

The detective has stolen Sarah's diary, and Maurice reads the story from Sarah's side for the first time.  The building falls, Sarah sees Maurice and assumes he is dead.  She prays, "God, I will give him up if you will only let him live."  To her he is dead and then comes back to life.  She has summoned and received a miracle.  How can she not do what she has promised?

There is very much of a Catholic overlay to this story.  Mother makes a point of telling us that she had Sarah baptized Catholic when she was 2.  In the Catholic world miracles continue on to today.  God has chosen to bless Sarah with a miracle, and then when she dies others are also blessed.  Lance is cured of his disease, and Smythe loses his birth mark.  Parts of this sound pretty dubious to me from a religious perspective, but Pope Paul VI approved, so who am I to complain?

West Edge successfully invoked the mysterious mysticism of the plot.  Scenes of WWII bombed London are projected on the back.  Throughout the first act Sarah appears as a sexual fantasy object whom Maurice meets when he is thinking of her.  Her mysterious, haunting presence permeates every scene even when she has no lines.  She walks like a benign ghost over the stage.  For me the staging was marvelously effective.

Sarah gives herself to God.

All of the singing and acting was marvelous, especially Carrie Hennessey, Keith Phares, Philip Skinner, and Donna Olson.

I apologize for not making it to La Boheme.
Posted by Dr.B at 4:32 PM