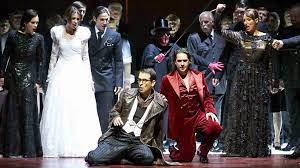 Lots of goodies are streaming from Salzburg on medici.tv this year.  I don't know how you tell if they are charging, but if you start it running and it doesn't stop, that means it's free.

Right now I am watching Don Giovanni.  They all appear to be in a hotel together with the characters staying in different rooms.  One of the groups of guests is getting married:  Zerlina and Masetto.   Donna Elvira comes in with her suitcase.  She is checking in.  What a great idea.  Two of the women, Zerlina and Donna Elvira, are wearing modern wedding dresses.  Donna Elvira has just come from marrying Don Giovanni, I imagine.  For me this absolutely works.

You see there's always a problem with this opera that every little bit seems to be in a different place.  So we end up with 10 or 12 sets, like the Met checkerboard.  So why not put the opera in an environment where the set stays the same and the people occupying it change?  I think the designer must be someone who spends a lot of time in hotels.

This Leporello just seems to follow DG around and goose all the same girls.  He isn't viewing his master with alarm--he's trying to get in on the action.  This reduces the complexity of his character.

Recitative is on the piano.

One problem is that the girls are all about the same age and build, making them difficult to tell apart as their costumes change.

In the second half our newlyweds do a mostly striptease in the lobby.  When I'm up wandering around in a hotel at night, I put on a lot more than these girls.  Now they are placing a bust of the Commendatore in the lobby.  This is actually fascinating.  For my requirement that the production needs to explain the plot it is aces.  Our Giovanni and Leporello are quite the pair, more interesting together than apart.  This is the first time I've thought that Giovanni was actually the main character.  I usually feel that he is upstaged by Leporello and the girls.  Excellent.  Congratulations.  It's only suitable that it should be at Salzburg.

They poison the Don.  Donna Elvira becomes a nun.
Posted by Dr.B at 2:21 PM

For me he's generally upstaged by Leporello and the girls. I like Kwiecien fine.