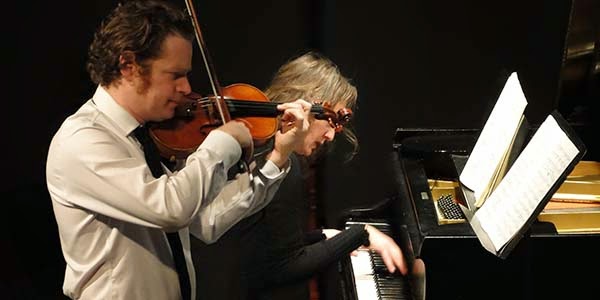 They called it the Church of Beethoven because every Sunday morning they have a concert at The Kosmos at 1715 5th street.    The space doesn't really look like a church.  There was a coffee shop on one side.

I went for the program.

"At the River" (1916) by Charles Ives, an arrangement for violin and piano of one of Ives' songs.  (I sang this in college.)  It's one of those pieces where Ives changes a hymn into something unexpected.

Chaconne (1998) from The Red Violin by John Corigliano.  This was a very enjoyable selection in neo-romantic style from the sound track of the movie.  I have no idea if it followed the Baroque form for chaconne.  I wasn't paying enough attention.

The artists were David Felberg, violin, and Pamela Viktoria Pyle, piano.  They were both enthusiastic players of this excellent exciting music.  I have loved the work of Charles Ives for many years, and found the intensity of their playing transformative.  It should never be less than this.  David managed to break a few bow strings even.

Coffee, poetry, music, silence.  And no chatter during the playing.  As I always do, I tried to start up a conversation, but it didn't work this time.  Try this if you are ever in Albuquerque.